Several thoughts come to mine when you examine the Smith & Wesson Model 69 Combat Magnum. The old truism, ‘carried much and fired little’ is one of them. A gun for the ammunition shortage also fits well. Twenty rounds is a workout with this firearm, but it has punch and polish and it isn’t a gun for the casually-interested shooter. The Smith & Wesson Combat Magnum moniker usually refers to a K-frame .357 revolver the Model 66. This one, however is built on the slightly larger L-frame and a five-shooter to boot. Smith & Wesson’s K-frame revolvers earned an unenviable reputation for excess wear when firing a steady diet of magnum loads. The old advice of feeding them twenty rounds of .38 Special for every magnum round generally needed to be followed. Unless you want to carry a bigger gun.

Smith & Wesson introduced the L-frame revolvers to address issues with shooting magnum loads from K-frame revolvers. They tended not to stand up the the pressures and stresses of magnum ammunition. The L-frame Model 69 Combat Magnum features improvements in the forcing cone, frame, and lockup, making it a much stronger, more robust (though only slightly heavier) design. 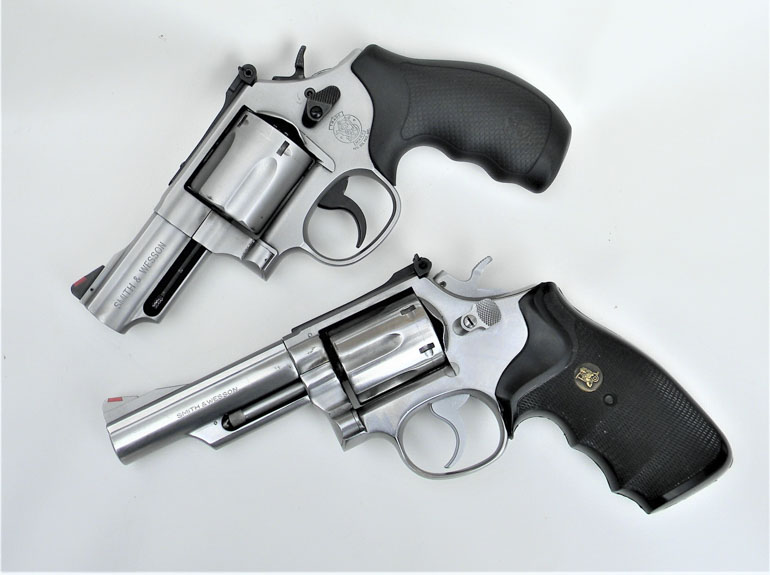 Don’t be misled. The K-frame magnums didn’t blow up, but they sometimes suffered cracked forcing cones and magnum loads are murder on smaller parts.

The big bore Model 69 Combat Magnum’s balance of power and portability is a good and very handy one. In the L-frame, Smith wanted to maintain a relatively compact revolver that could still be carried fairly comfortably. The L-frame features the same grip size as the K frame revolvers, but with a larger 5-round cylinder.

While the Model 69 was originally introduced with a 4.25 barrel, the more concealable Combat Magnum version has a 2.75-inch barrel, making it work very well for concealed or outdoor defensive carry. Even with its big bore chambering, this versatile wheel gun is far more useful than you may think. It’s primarily designed to be carried a lot and fired sparingly with Magnum loads, but if loaded with .44 Specials it’s a very enjoyable revolver to shoot that delivers surprisingly good accuracy.

Some may question the wisdom of chambering a relatively light weight (34.4 oz) revolver in .44 Magnum. Shooting long strings of magnum loads isn’t something you’ll probably want to do with this revolver. I have fired perhaps one hundred twenty or so magnums over eighteen months and that’s plenty. I have no doubt the design can handle far more, but I’m not sure my hand can. But with well over five hundred .44 Special loads fired, this piece has earned my respect. A departure from earlier revolvers is the L frame’s much more robust lockup system. It features a spring-loaded ball in the L frame that firmly mates with a detent in the crane that’s designed to stand up to the punishment of big bore magnum loads.

The Combat Magnum’s cylinder is 1.56 inches wide and the chambers are nicely polished. The barrel is a stainless steel unit screwed into the frame and covered with an outer shroud. This simplifies lining the sights up at the factory and doesn’t seem to affect the Combat Magnum’s accuracy potential. 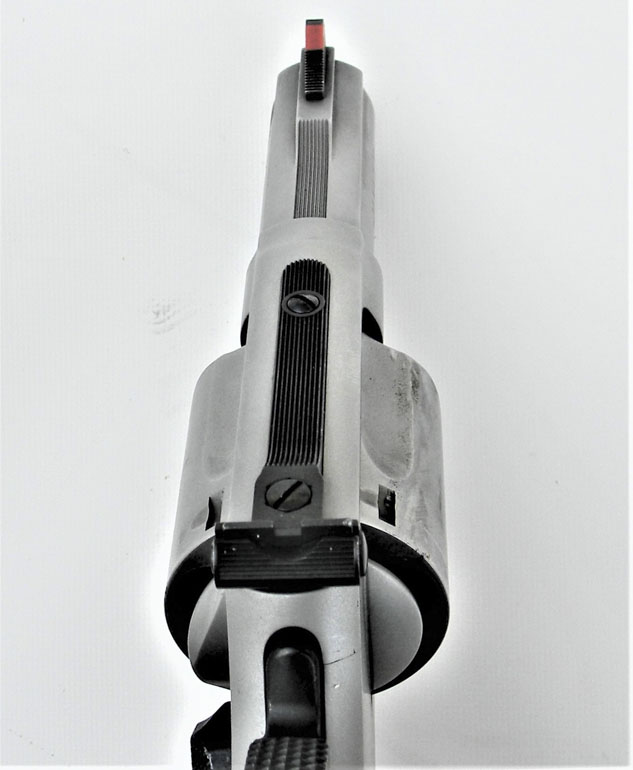 The fully adjustable rear sight and orange insert front ramp make for excellent sight acquisition. They make getting the Model 69 on target fast and precise and are ideal in a defensive revolver. The Model 69 Combat Magnum has round butt rubber grips. I have experimented with larger grips, wood grips, and other types and find these factory-issue grips to be the best for all-around use. They are snag-free under cover garments and insulate the hand well from hard steel and do the best job possible of absorbing .44 Magnum recoil. The revolver has a bead-blasted matte finish stainless steel hat is attractive and durable.

The Combat Magnum weighs just 35 ounces unloaded. That’s lighter than a lot of .45 ACP 1911s and about the same as a four-inch barrel K frame .357. The trigger action is exceptional, smoother than a Model 19 Classic and a Model 27 Classic recently tested. On the Lyman scale it breaks in double action at ten pounds and four pounds even in single action.

Firing the piece is easy enough with .44 Special loads. A 200 grain round at 700 fps is pleasant enough to shoot and great for practice. The Model 69 is a joy to use and fire with these loads and accuracy is excellent.

With the revolver in the double action mode I was punching the X rings out at 15 yards. Slow fire single action fire delivers five-shot groups of 1.5 inch or so when you take your time, so this is an accurate revolver for one with such a short barrel and sight radius. But powder puff loads shot for accuracy aren’t really the intended purpose of this revolver. The Combat Magnum is a personal defense handgun and the .44 Special/Magnum round is used against animals, some of them two-legged. Most attacks occur quickly and can happen at very close range. A revolver can be pressed into the body and fired repeatedly where a semi-auto would jam.

Control with these rounds remains excellent. Recoil is about in .45 ACP territory, perhaps a bit less. Muzzle blast and flash are much less than .357 Magnum. This makes the Model 69 Combat Magnum an excellent all-around, go-anywhere revolver for the dedicated wheelgunner looking for a defensive handgun.

For outdoors use we probably need something stronger. The big cats can get really big. Feral dogs are dangerous and in my home state wild boar have attacked and brought down horses. And then there are bears. Not quite in .44 Magnum territory, I loaded .44 Special Buffalo Bore 255 grain semi-wad cutters. This load uses the real Keith SWC with a long nose and sharp cutting shoulder. At 980 fps that’s a handful of recoil. The load may be controlled in double action pairs if you take your time and that rubber grip does a good job of recoil absorption. This is my outdoor load of choice.

And then there are .44 Magnum loads. Most factory 240 grain JHP loads can be downright gruesome to shoot and clock at about 1100 fps. I’d just as soon run the .44 Special 255 grain load for outdoors carry. In an emergency, perhaps you wouldn’t notice the magnum recoil at very close range while attempting to get a bear to change his mind, but I find heavier magnum loads do the job

The Smith & Wesson Model 69 Combat Magnum has a lot going for it. While it’s probably most appropriate as a purpose-designed outdoors defense revolver, it’s quite useful for concealed carry as well for those who are willing to carry the load. In the wild it’s lighter than most .44 Magnum revolvers, but offers plenty of very real power. Its L-frame size is a bit larger than most short barrel .357’s but the big bore Combat Magnum offers excellent control and plenty of punch with .44 Special loads, too.

In short, the Combat Magnum is still alive and very well.

Reliability * * * * *
This is a quality stainless steel revolver. It is reliable in every circumstance.

Ergonomics * * * * *
Well-balanced with good, recoil-absorbing rubber grips. This is possibly the perfect size for a defensive revolver.

Fit and Finish * * * * *
The bead-blasted matte finish on the stainless steel wheel gun is attractive and nicely done.

Concealed Carry  * * * *
I carry big guns, but the L-frame Model 69 isn’t as flat as a 1911 or as easy to pack as a GP100 or Tracker revolver. Carried on the hip in cooler weather with a cover garment works well.

Overall: * * * * *
The Model 69 Combat Magnum is a handy, versatile revolver that can fill a lot of different roles depending on the loads used. It’s an almost ideal blend of a concealed carry gun combined with a very capable big bore outdoor critter defense revolver.