The Single Man’s Guide to Dating and Guns 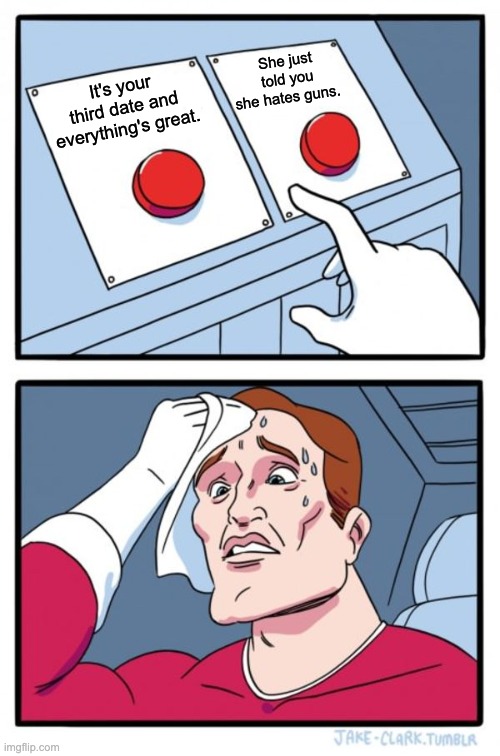 In the movies, the female companion of the brave action hero never grills the hero about why he packs a pistol all the time. In real life, however, not everyone is so, well, progressive of thought. As a 27-year-old man with a CCW permit, vetting dates has become a talent. And a necessity. Making sure your potential companion is of the same mind can save a lot of time and heartbreak.

Here are a few tips for finding firearm-friendly females:

Pay attention to the woman’s background. This is where social media is a big help.

I hate to use the word “stereotyping,” but if your lady friend is a big Bernie fan and lists her dream job as being a diplomat at the UN, it’s probably not the wisest approach to take her for a first date to the gun range.

But be careful not to fall into the trap of associating geography with anti-gun sentiment. I dated a girl from New York City who didn’t mind me owning guns at all. And I’ve met more than a few from red state America who support The House of Feinstein.

Can the gun fanboy talk. If you’re out with Jessie Harrison’s little sister, by all means compare range notes. The average girl, though, doesn’t have the slightest idea about the differences between a GLOCK Gen3 and a Gen4 and she couldn’t care less.

Be prepared for some unfortunate, incorrect preconceptions as well. At one time, circumstances forced me to load and uncase my Smith & Wesson M&P9 when leaving the base. My date at the time said, “Nice GLOCK.”

The poor girl obviously meant well, but…ouch. I had to eat my pride, grit my teeth, and smile back, even as I felt the instinctual need to jump down her throat and ask her, “When was GLOCK ever located in Springfield, Massachusetts?!”

Be on the lookout for signs of a turbulent dating history and weigh anchor of you detect signs of problems. Women shouldn’t be judged for their past mistakes, but you have to be practical about this. Many ex-boyfriends can be possessive and sometimes violent. Even well-balanced dudes have been known to lose it and resort to irrational activity in the face of rejection.

If something happens and it results in a defensive gun use with you holding a smoking pistol, every detail of the event will be open for public scrutiny.

Defending your home or person from a random attack by a total stranger is a situation anyone can understand. It can be a lot more complicated to argue self defense in court when the dead body is that of a former suitor of your current significant other.

Ideally, there will be a paper trail demonstrating the individual’s prior instability, but it’s not hard to imagine how bad your case will look if the bad guy shows up out of the blue and you’re forced to defend her and yourself.

There’s  one more complicating factor — some women are less than truthful about their current situation. This may be just an annoyance when you’re an unarmed man, but having a CCW permit means there’s zero room for impropriety here.

Don’t play the game of lovers’ geometry, where you end up a participant in a uncomfortable triangle. There’s a thin line between defending against a crazed attacker, and a plot to commit the murder of an inconvenient husband. Even if you had no idea of the association, it won’t stop a prosecutor from arguing it at your trial. Better a lonely night at home then a cuckolded boyfriend or husband with a short temper finding you with his wife. After all, you’re not the only man who carries a gun.

Finally, the best advice is to just act normally. Don’t make carrying a gun out to be a big, life-changing, epic event of monumental nature. If you’ve done a good job in pre-selecting your date to start with, she won’t care that you’re armed, and might even appreciate it as a positive attribute. Good luck out there.