There are generally two kinds of gun owners: those who have fired a shot unintentionally and those who will. Another way to look at it is, play with fire long enough and you’ll eventually get burned.

The first thing we have to understand is the definition of an unintentional — or negligent — discharge. The way I explain it to students is an unintentional discharge is any time the gun fires as a result of failing to follow basic safety rules. Either through carelessness, lack of attention or deliberate indifference, the gun fired while it was in your possession.

Despite what you may read in the media, modern firearms don’t just “go off” by themselves (barring very rare mechanical failures). They can only be fired through human intervention. As gun owners, students, and practitioners of the art, it’s incumbent on us to be safe with our firearms. If something is predictable, then it’s preventable.

You have to be sure

That’s the major issue. Then didn’t check. Whether through operator error or deliberate indifference, their actions lead to their gun firing when they didn’t intend it to.

Safety rules and procedures didn’t materialize out of thin air. They came from the hard lessons we learn in life. It’s when we fail to apply these lessons that we move from accidental to negligence. It’s one thing to discharge the firearm accidentally due to ignorance and another matter entirely when you know better.

Many who are reading this blog have been around firearms for a long time. You no doubt know the four rules of firearm safety: I’m confident many would agree that the most important safety rule is number two. Over the years I have come to appreciate that rule the most. While adherence to all four rules is critical, the priority needs to be safe muzzle direction at all times. Even if the other rules are broken, safe muzzle direction ensures the worst won’t happen even if a firearm is negligently discharged. 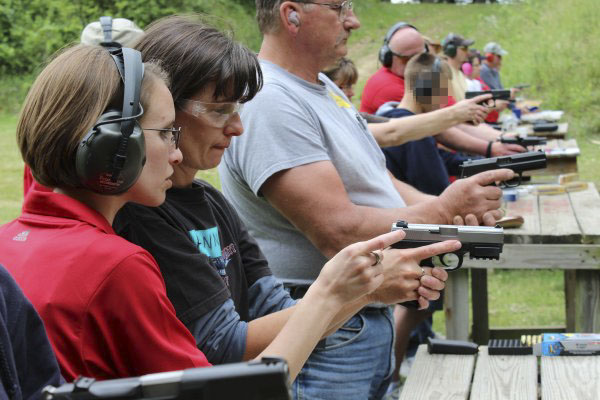 Teaching new students a litany of rules they’ve never heard of before can set them up for failure. For one thing, they aren’t going to remember all of them right away. Second, even if they do remember, they still have to apply the knowledge or change their behavior.

Drilling then on the importance of muzzle control and keeping their firearm pointed down range is relatively simple and easy to learn. It should be the first thing any new shooter is taught.

For this reason, we begin students on three safety rules to start. Keep the gun pointed in a safe direction so that even if you fail at the others, the risk of property or personal injury is minimized. The Truth About Guns

Keep your finger on the home position until ready you’re to fire. If you aren’t sure where your finger belongs at any time you’re holding a gun, always go home — high along the frame and away from the trigger. We also have new students keep their guns unloaded until they’re ready to fire.

Once you get these three rules embedded into your students you can conduct live fire training with an acceptable level of safety. For our new students, these are the bare minimum and we work hard to instill them from the get-go.

As an instructor it’s incumbent upon us to ensure the safest training environment possible. An unintentional discharge, whether accidental or through negligence, is the gravest of sins.

As an instructor, the first thing you have to acknowledge is how a discharge could could happen to you. Don’t think for a moment you’re exempt.

Prior to a demonstration, whether live or dry fire practice, I decide where I’d want a bullet that’s fired to end up and adjust accordingly. I don’t even like pointing a blue gun in an “unsafe” direction. It sets a bad precedent that could be repeated with a functional firearm.

When I’m performing a demonstration I don’t ask a fellow instructor or student to confirm the condition of my firearm. I have to set the example that I can be trusted to safely unload and handle my gun. Most students won’t have access to a second party to check that their gun is unloaded when they’re on their own. We all need to develop the skills to complete this fundamental task on our own, then maintain that standard and hold others accountable.

Guns are dangerous tools. It’s for this reason that we rely on them for defensive use. But there’s no reason we can’t mitigate the risk where possible through education and training. Learn the four rules and practicing them every time you’re around a firearm.