We’ve got just four weeks to go until the election and with things starting to open up again, there will be a whole lotta gun shows between now and then. They can be good places to find things that otherwise may not available in your neck of the woods. Here’s how to navigate them during a time of plague.

First a couple of previous posts that could be useful to first-timers: one on gun shows for beginners and a gun show etiquette guide.

The old school gun shows that were mash-ups of gun-related yard sales and flea markets are, by and large, no more. What you will see most often nowadays are the occasional collectors table amid a sea of federally licensed firearm retailers. Yes, all of these photos were taken when masks were only for Halloween and sellers’ tables were full of firearms and ammo. (AP Photo/Lynne Sladky)

Shows set up in small places like a national guard armory, VFW, Knights of Columbus halls or in huge exhibit and event spaces like an expo or civic center. Sometimes they’re even a fairgrounds or livestock grounds owned by a city or county depending on the the area. I’ve worked some small and large shows and even walked around some of the larger ones as a spectator. The largest gun show in the nation in Tulsa is on my bucket list to visit when I have more free time and the world becomes more normalized again. Assuming it does.

Now that 2020 has changed the game for a lot of lives and businesses, a more up-to-date version of how to visit a gun show is in order.

In the old world, you’d touch and feel up everything that interested you and roam around at your leisure. That’s not such a good idea anymore. Here’s how things are working now.

Nearly every large venue is limiting occupancy and requiring masks. They’re also checking your temperature at the door.

Just like (most) airlines are blocking out middle seats, venues are requiring exhibitors and attendees alike to wear masks and follow distancing guidelines. If you don’t have a mask, get one or be prepared to buy one at the door.

If you don’t comply, I have heard of law enforcement working the shows are getting called over the PA to haul someone out the front door. Some venues aren’t messing around and taking this very seriously. Don’t poke the bear, play by the rules and everyone will be happy.

Also keep in mind that the lines to get inside a venue now can wrap around the building or extend deep into the parking lot in this super-heated gun-buying market. The line to get in the last gun show I attended in town was reminiscent of the line at Costco at 6 AM for people lining up trying to get toilet paper.

Right now, 9mm, .380 .5.56 and lots and lots of other items are out of stock everywhere. The beauty of a gun show is that it creates a marketplace where readers like you can shop at literally dozens of vendors under one roof. It brings people and products together, and although you might not like the prices, it beats the alternative. Kitchen table FFL’s who only sell at gun shows sometimes have inventory you won’t see at your local gun store. (AP Photo/Lynne Sladky)

With gun stores looking very much like a Soviet Union supermarkets with grim faces all around and mostly empty shelves, a lot of weekend warrior gun and ammo dealers are setting up at gun shows and selling what they can when they can. A lot of home-based FFL’s only sell at gun shows, so there’s a chance they may have something in inventory that didn’t sell out yet since people tend to flock to the big box stores before they get to the kitchen table FFL’s.

Make a list of what you’re looking for and be smart about your shopping. Don’t dawdle or gawk unnecessarily. Try not to touch things unnecessarily. Get in and get out. It’s a smart way to do things nowadays.

Bring your own pen.

Nobody wants to use someone’s pen that’s been used by Lord knows how many people. Retailers still have to do paperwork at a gun show, unlike what you’ve read on the internet or heard on TV. The gun show is an extension of licensed premises and all the state and federal laws still have to be followed. There are some folks who think a gun show is some magical firearm law-free zone where anything goes. That’s not the case at all.

Bring your own pen and try to fill out the 4473 right the first time. Read it carefully and the quicker you can fill it out, the faster you can get out of the show with your gun and back home.

Problem areas on the form: nobody remembers to answer question 10A, question 12 d 2 is typically wrong, and country of citizenship is often forgotten and overlooked.

You didn’t hear that from me.

Be ready for your background check to take a while.

We’ve discussed this off and on, due to the volume of transactions, but the national and state background check systems are swamped with transactions. We’ve seen checks take days to process versus the minutes or hours they used to. Every day is like like Black Friday on steroids.

If the retailer is local, grab one of their cards, pay them, and tell them you’ll pick up your gun at the end of the show when things calm down. Or maybe even later in the week. That makes things easier for everyone. Don’t dawdle and spend hours wandering around the building waiting for your background check to be completed. Write it up, pick it up later, or when things aren’t as busy. 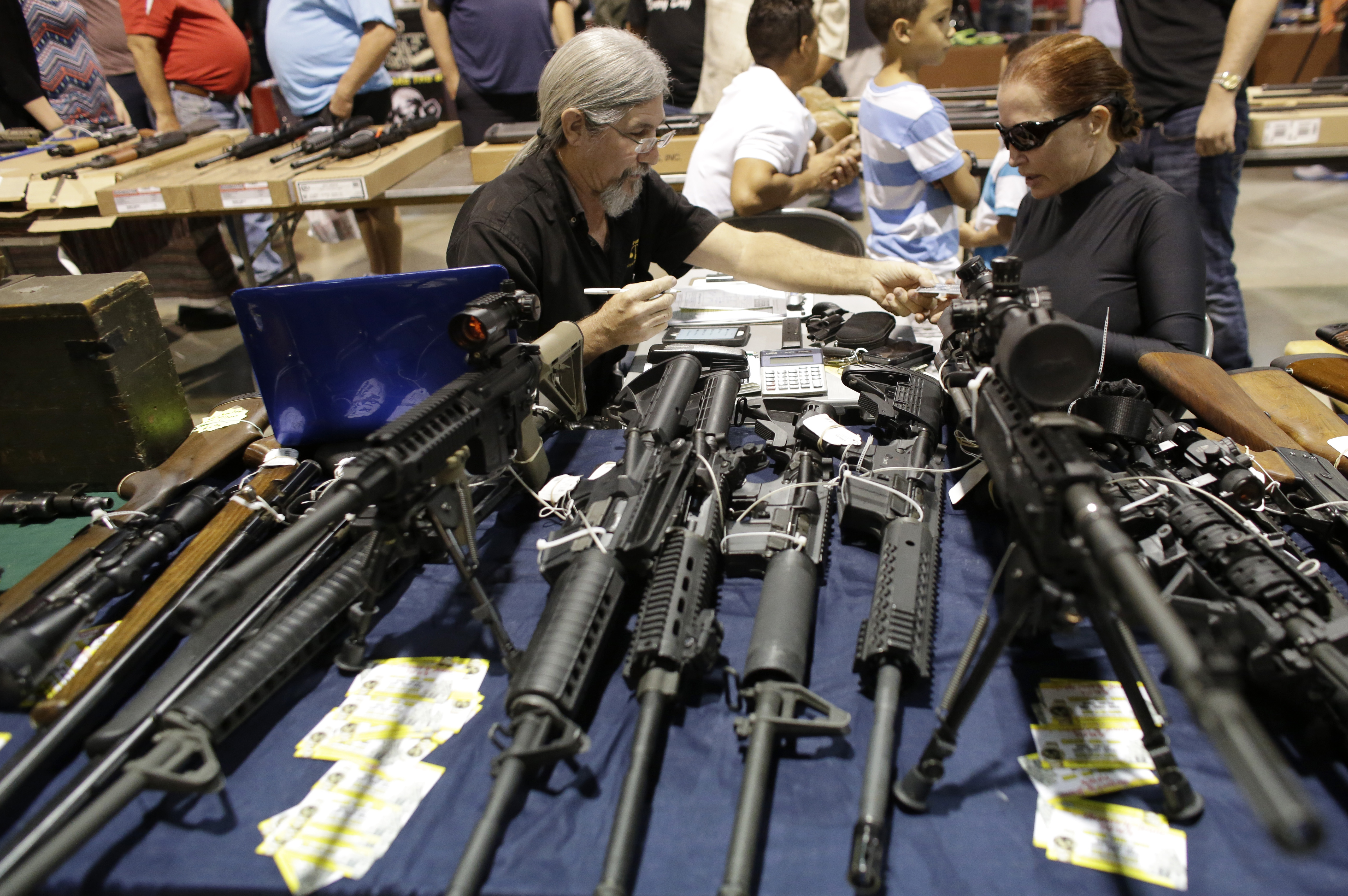 Most shows will let you back in later in the day or even the next day for free if you tell them you’re coming back for a pickup and you’re holding a receipt. If you head in the last 20 minutes before the show closes, often that’s the slowest time where there won’t be a line.

Don’t plan on making a purchase at 3:00 PM on a Sunday when the show closes at 4:00 PM and expect magic to happen in one hour. Get your shopping done early so you don’t get caught in the fray of closing time and dealers packing up, some of them from out of town.

Make sure you bring a current ID.

Some things haven’t changed at all, pandemic or not. There’s nothing more frustrating than having to deny someone a sale on a technicality. I want you to get your gun and your stuff and go home and enjoy it. But the only way that can happen is if you have a current valid ID. No current ID means no gun. No gun means no sale for me and lots of aggravation for you.

Search engines are your friend.

It doesn’t hurt to price check things once in a while. If you’re making a shopping list, your favorite search engine can check some big vendors for features, pricing, etc ahead of time. Information is king at a gun show and very valuable. Doing your homework ahead of time makes you a more educated and sharper consumer, less likely to be swayed by the lies from some snake oil salesmen or some poorly educated sales weasel just looking out for their bottom line.

If that’s your thing — and it seems there are metric tons of it sold at every gun show, there’s still plenty of the salty, chewy treat floating around at the shows. Grab a package on your way out and work on that for a while.

Prepare, do your homework, make your list, check it twice, put your mask on, get in and shop, and get home. Not exactly rocket surgery.

Follow these tips and you’ll have a better 2020 gun show experience.

2020-10-04
Previous Post: It’s Easy: How to Zero Your Rifle in One Shot (Or Almost)
Next Post: Suppressed Straight-Pull AR223 on Rekon Tripod -The Firearm Blog