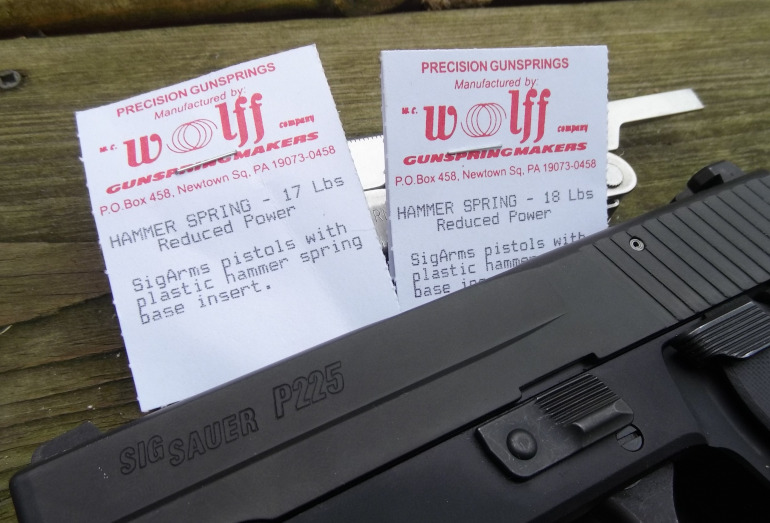 When it comes to buying used guns, there is nothing more frustrating than dealing with some of the creative choices of the previous owner(s). When I picked up a used SIG SAUER P225 A1 the other day, I was expecting a walk in the park, just like I do when I unbox a brand new SIG pistol for review. But that was not to be.

Today we’re going to look at tuning a pistol with new Wolff springs and what you can expect to achieve as a result.

I have been buying guns and fixing them up for years, from Mausers to J-Frames, and I’m always surprised when I see the lengths to which some people go to “improve” their firearms. There are many things I consider borderline criminal when it comes to the cosmetic features of guns, such as cheap and gawdy accessories and vomitous paint schemes, but nothing compares to the unforgivable sacrilege of…sporterization.

Some people are more subtle in their chosen improvements, such as filing and tweaking the internals to run better with a given type of ammo or polishing surfaces to reduce friction. It can take a trained eye to spot these things, but even a seasoned dumpster diver like me can be misled on occasion.

I recently picked up a SIG SAUER P225 A1 pistol in good condition. This is a very nice gun that’s an update to one of the original SIG carry guns. The A1 designation brings modern features to the old gun and makes it arguably one of the most comfortable guns made. If you haven’t wrapped your mitts around one, I very much recommend you do. The gun is a relatively simple compact single-stack version of the full size 9mm P229. This is not really a review of this pistol, but its design is important here. The P225 A1 is compact, about the same overall size as a GLOCK 19, but isn’t chunky or bulky. It’s a double/single action with a de-cocker, the same as most SIG pistols.

The only serious complaint about the gun is its capacity. They only hold eight rounds with one in the chamber. The magazine body is basically the same as that used in the P239, which is a smaller gun. I would love it if SIG came out with a dedicated nine round or slightly extended ten round mag for this otherwise excellent pistol. It wouldn’t take much effort to do and would remove any perceived handicap of carrying a midsize 9mm with comparatively low capacity. SIG managed to fit 10 rounds into the minuscule P365 so it seems possible in the P225.

When I took this gun to the range after I picked it up, I was deeply saddened. The thing wouldn’t cycle at all. I thought it was because I was using cheap target ammo, but the problem persisted with every single load I tried. I experienced just about every failure known to man that frustrating afternoon.

Many people would simply give up on the gun and sell it at that point, but I decided to see if I could make it cycle. My first task was to clean it and go back to the range. I wiped about a tablespoon of gunk out of it and removed some mysterious burrs on the slide rails with a fine stone. Confident in my results, I fired it again with everything from 115gr plated rounds to some Buffalo Bore +P+.

The gun cycled a bit better, if you consider a malfunction every other shot better. At that point I knew something was wrong inside the gun. The trigger was admittedly heavy, but I was right in the middle of doing a bunch of .44 Magnum articles with double action revolvers and thought nothing of it.

I was troubleshooting the gun in my workroom and noticed that there appeared to be a great deal of upwards pressure being applied to the slide by the hammer as the slide moved to the rear. That’s when I decided to take a new route and get her some new springs.

My first mistake was assuming that the gun was all original when I bought it. SIG wouldn’t send out a gun that wouldn’t cycle with their own brand of ammo at the very least. I made note that the hammer spring was unusually heavy at this stage and the recoil spring weight was curiously light.

I did some reading and discovered that many people erroneously install a new hammer spring to increase the power of hammer strikes. It’s likely that the previous owner bought a case of ammo with hard primers and thought a new spring was the key to getting reliable ignition. Many people don’t consider that or don’t want to deal with getting rid of their ammo and will alter the gun instead. Weird, but it happens.

My next clue was the recoil spring. It was very light…so much so that it didn’t have sufficient forward momentum to strip a fresh round off the magazine. While easy to rack, the weak spring caused the slide to lose momentum during its rearward travel due to the increased power of the hammer spring. In a sense, the hammer was dragging and slowing the slide down enough to cause the gun to malfunction.

I called Wolff Gunsprings, the premier maker of all things spring-related, and discussed it with them. After I finished the conversation, I received two packs of springs to tune the gun. Each pack consisted of three different springs of different poundage ratings. I now had three firing pin springs, three recoil springs (21#, 19#, 17#), and three hammer springs (19#, 18#, 17#). I took the gun, the springs, and a variety of ammo types to the range and set about testing them. I fired the clean gun with the springs it came with and instantly had malfunctions with each ammo type. Then I removed the hammer spring and replaced it with the lightest one at 17 pounds. What a difference it made. While I had an issue with light strikes, the trigger pull was dramatically reduced. The slide was now able to come back at full velocity with nothing to slow it down.

But a light recoil spring coupled with a light hammer spring wasn’t a great combination. The slide moved so quickly under recoil that it was slamming into the frame and again caused malfunctions. Not good.

I slipped the 21-pound version on the guide rod and the 17-pound hammer spring with the 18-pound one. It worked as far as eliminating the light strikes, but it slowed the slide down too much to where most ammo wouldn’t allow it to lock back empty or even cycle all the way. My recoil spring was now too strong.

Next, I replaced the 21-pound recoil spring with the 19-pound version. This worked for the most part, but the gun still didn’t feel right. The firing pin marks were still too light for comfort and the slide was still a bit too stiff. The recoil felt jarring, not smooth, although it was now cycling 100% with all ammo.

My last combination was to install the 17-pound recoil spring and the 19-pound hammer spring…and it was as if the lights all suddenly turned green. The slide velocity was smooth and it locked back on an empty mag with all types of ammo. The primer marks were deep and the trigger pull in both double and single action was far, far lighter and smoother than what I started with. The gun was like a whole new animal and it just wanted to shoot anything I put in it.

So this story had a happy ending, but that’s not always the case with many unfortunate guns out there. If you’re having difficulties with your pistol, I’d suggest you start by changing out the springs. There’s no guarantee that your gun will be more accurate and reliable, but it’s worth a shot before you sell or consider major alterations.

In my talk with Wolff, they told me that many people are under the impression that certain spring kits will enhance accuracy, slide unlock timing, and a variety of other things. While this can be true, it all depends on the individual gun.

My results here may not be your results, even with the same model of pistol. The previous owner clearly thought that changing the springs would enhance the gun, but that was obviously not the case. I would absolutely recommend trying out several springs like I did here to get the best results.