When it comes to service grade firearms, there are two main considerations; the big R and little m. Big reliability and little maintenance. I don’t mind maintaining a firearm, I simply want it to be rugged and workmanlike. The shotgun illustrated has proven to be very reliable and gives all of us a nice break when we are looking for something based on the Benelli system.

Turkish makers have gained a great deal of experience manufacturing clone guns for brands like Beretta. The Stoeger shotguns and various Beretta Cougar clones are two such examples.

The subject of this review is a close copy of the Benelli M4. The Benelli was designed for use by the US military and has developed an excellent reputation. It’s gas operated in contrast to earlier Benelli shotguns which used an inertia driven action.

Benelli’s ARGO gas system, with dual pistons that drive the drive bolt, is very clean and simple to maintain…a recipe for reliability. That’s why the M4 is among the most respected combat shotguns of all time.

I have owned the M4 and found it to be a great shotgun without any faults. I just couldn’t justify a two thousand dollar shotgun, however, with other demands on my finances. I am primarily a handgunner who owns a few nice rifles. I appreciate a nice shotgun. Without sounding cheap, if the shotgun is a projectile launcher, well, some pretty inexpensive platforms launch some very credible ordnance.

For those with a taste (but not not the finances) for something better, the Toros Copolla T4 offers a viable solution. I don’t say this lightly, but compared to the original Benelli, there seems to be no drawback or compromise in the Toros clone. I’ve even found one advantage (besides price); an enlarged trigger guard, although only special circumstances would call that advantage into play. Toros even claims one hundred per cent parts interchangeability with the M4 and aftermarket parts. I should mention that I have now fired the Toros Copolla T4 far more than I have the Benelli. There is a reason for this. The Benelli has a tremendous reputation. A good name and service record can’t be overrated. I could pick up a Benelli, fire a few shells for familiarization, and feel good to go.

The Toros was a new quantity, so I put it to a far harsher test than I probably would a new Benelli. While testing gear is important, an unknown quantity like the T4 demands even more examination.

I’ve run the Toros Copolla T4 with a wide variety of shells. The shotgun functions with Fiocchi, Sellier and Bellot, Federal and Winchester buckshot loads. The patterns differ, of course, as shotguns are individuals, but reliability is the baseline. While we have different preferences in shot size and brand loyalty, the shotgun should be reliable with all loads.

While my friends and LEO veterans recommend #00 buck by far, there are well founded recommendations for #1, #4, and #000 buckshot. The Toros Copolla T4 has functioned with all of them. For home defense, without being evasive concerning an important subject, most buckshot loads will work just fine. At seven yards the pattern is cohesive whatever the load you’re shooting.

For use out to 20 yards or a little beyond, the Federal Flite Wad with its tight pattern is preferred. Hornady’s Critical Defense buckshot is also a first class service load. An advantage of the Toros shotgun is the three choke tubes that are included with the smoothbore. I like the ability to tailor the shotgun and the choke. Buckshot and shotguns are more individualistic than many think and aren’t always true to form. That’s why the three options are good to have.

Pattern your gun and load — whatever shotgun you’re using — to make sure it’s doing what you need it to do.

The T4 features a generous loading port that allows rapid, positive loading into the gun’s five-round magazine. The cocking handle is nicely shaped for rapid manipulation. As on the M4, the bolt release is small — probably smaller than it should be on a tactical shotgun — but it’s easy enough to operate. The shotgun’s ghost ring sights are well suited for combat use. The stock and pistol grip make for excellent control. The crossbolt safety is located just behind the trigger guard. 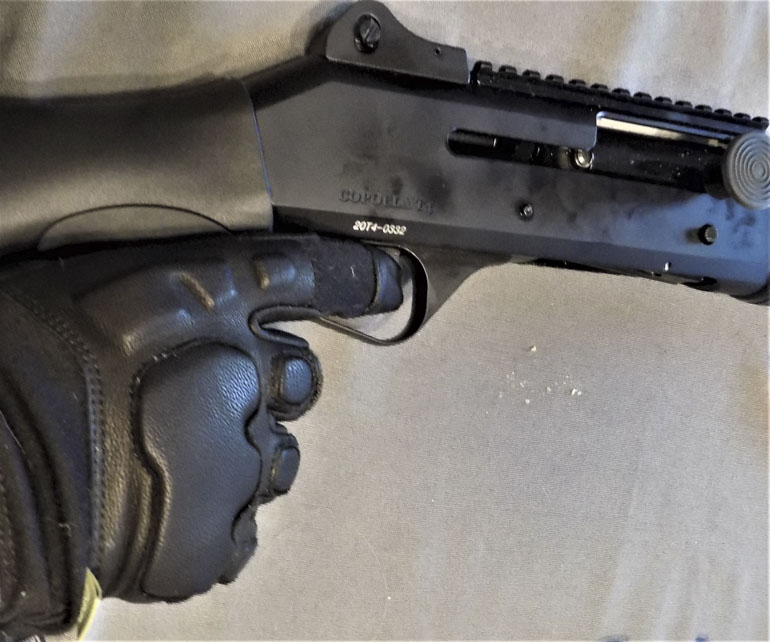 Again, the trigger guard is enlarged compared to the M4. That’s good for used with a gloved hand. I like this touch.

The shotgun runs well and tracks between targets quickly. The trigger is clean with a rapid reset. You don’t want too light a trigger on a hard-recoiling firearm. It would be easy to double fire a light trigger during recoil. 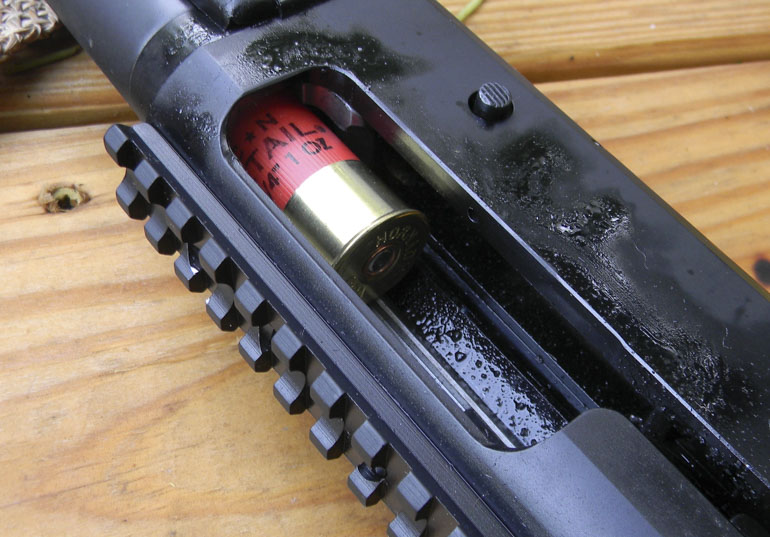 Every detail of the Toros shotgun seems well thought out. An aspect of the shotgun I find personally important is slug accuracy. Even smoothbore shotguns are accurate enough for slug use at close range. For defense against large animals or as a substitute for a rifle out to 50 yards or more, slugs can be important.

I have tested slug loads including the Fiocchi Aero slug in both reduced recoil and full power versions, Federal TruBall, and Hornady American Gunner. I printed a cloverleaf at 20 yards with three slugs and several 4-inch groups at 50 yards. Most groups at 50 yards are larger, however, at five to six inches. A bit more experimentation would probably demonstrate greater accuracy, but then that’s getting into gun crank stuff, not practical matters. I particularly am interesting in slug accuracy and it is an interesting subject. That is a huge chunk of lead hurtling through the air, though at the expense of some serious recoil.

The Toros Copolla T4 shotgun has proven to be reliable beyond any doubt. It handles quickly and recoil is very controllable. Handling isn’t comparable to the Benelli M4, it’s the same. I find no difference.

The Copolla T4’s enlarged trigger guard is a plus and may be important to some users, especially those living in colder climates who wear gloves much of the year. The fit and finish seem at least comparable to that of the Benelli.

The primary advantage of the T4 over the M4 — price — means little if the shotgun isn’t reliable. Through hundreds of rounds of all kinds of shotgun ammo, the T4 certainly seems to be as reliable as a machine can be.

Reliability: * * * * *
With just over five hundred shells of all kinds through the shotgun, it’s been faultless.

Accuracy: * * * * *
Accuracy means quickly placing a load of buckshot into a target. The T4 excels at that. The primary advantage of the sights and handling are apparent when the engagement stretches past 15 yards.

Handling and ergonomics * * * * *
If you like the fast intuitive handling of the Remington 870 or Mossberg 500 the T4 or M4 will seem odd at first. If you like the modern pistol grip semi-automatic shotgun, the T4’s handling and ergonomics are excellent and intuitive. In this day when most defensive shooters have an AR-15 rifle, the pistol grip shotgun makes sense. Recoil is modest, though it weights about a pound and a half more than my Beretta 1201FP. I love the Beretta, but it kicks more. The M4/T4 package should be carefully examined before you make an investment.

Overall * * * * *
The Toros Copolla T4 is a Benelli M4 clone with all the outstanding handling, reliability and gas operation of the Benelli. The value is attractive — less than half the price — and the shotgun is certainly worth the money.