The former CEO of Blackwater, the renowned, often controversial private security company, has gotten into the firearms world. I’m not clear how the company’s corporate structure works and how much the current Blackwater company has in common with the security company (now known as Academi) if any, but it’s the name they’re going by.

The Blackwater Sentry 12 pump action shotgun is their latest creation and is a unique firearm. American made, box magazine-fed shotguns are typically designs adapted from standard tube magazine-fed guns (see the Remington 870 DM and the Mossberg 590M). The Sentry 12 is different because it was built from the ground up to be a magazine-fed pump-action shotgun.

The Blackwater Sentry 12 is a 12 gauge shotgun that comes with two five-round box magazines. The gun can chamber both 2.75 and 3-inch shells. The Sentry 12 comes with no sights but has a full-length Picatinny rail that runs the length of the gun’s monolithic upper receiver.

The barrel is 18.5 inches long and is a cylinder bore. The firearm is a light 6.5 pounds, and I have liked my shotguns lighter than heavier lately, so that’s a good thing. The Sentry 12’s unique look is a blend of AR aesthetics and futuristic sensibilities. It’s certainly a cool looking gun, at least in my book. There’s a healthy heap of AR inspiration in the design, and that’s not a bad thing. Lots of American gun owners know how to handle a AR-15, so for them, the Sentry 12 will be a natural fit.

The gun breaks down in a very similar manner to the AR-15. You separate the upper from the lower and then remove the bolt and bolt carrier. Quick, simple, and efficient. 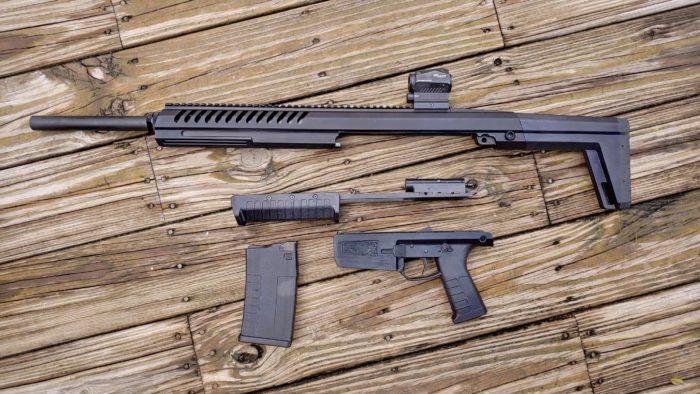 The Sentry 12 ready for cleaning (Travis Pike for TTAG)

The barrel is easily removed via an exposed barrel nut. This allows for easy cleaning, but I imagine Blackwater could produce shorter barrels for SBS models or even braced firearms models. You can remove the stock, and maybe Blackwater will make adapters to use other stock types in the future.

The Sentry 12 is quite ergonomic and possibly one of the most ergonomic shotguns out there. It’s a light 6.5 pounds and 36 inches in length overall. The controls are quasi-AR, with a very similar safety and magazine release. The pump release is toggle placed right behind the magazine well. All the controls are completely ambidextrous. Not reversible, but truly ambidextrous. The pump action forend is small and slim, but provides more than enough room for a good grip. It’s ribbed for your control. The reach from the pump is shorter than both Mossberg and Remington by about 2 inches. This makes the shotgun more accomodating to smaller shooters. The action itself is smooth and tight. The gun has dual action bars and isn’t sloppy like a Mossberg. It’s tight like a good 870. That’s not to say a tight action means increased reliability or anything critical to the firearm. It’s just a nice-feeling action and should be credited as such.

Speaking of Blackwater or Iron Horse, or whoever designed the gun was smart when it comes to the length of pull. The LOP on the Sentry 12 is only 12 inches and some change. That’s much shorter than the 13.5″ to 14.5″ LOP most shotguns have. This makes the gun much more comfortable and easier to use in a squared-off, modern shooting stance. 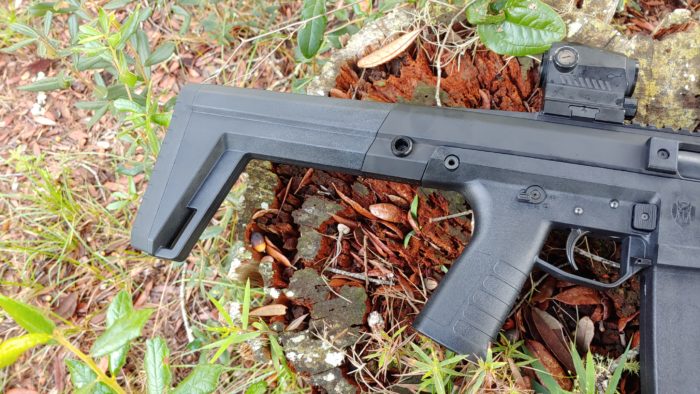 Also, that LOP makes the Sentry 12 accessible to smaller shooters. My 5-foot 4-inch petite girlfriend could comfortably handle and shoot the gun safely. She said it was much more comfortable than the Mossberg 500 we had at the range that day with its 13.87-inch LOP.

The Sentry 12 is a nice design from someone who knows and uses shotguns in a tactical manner.

The 5-round magazines confuse me. If this was an imported gun, I’d get it, but five rounds ain’t enough in this reviewer’s opinion. Most tactical shotguns can hold anywhere from 7 to 9 rounds, and if you are using a box magazine, seven or even nine rounds doesn’t create anything too long for effective use. I hope Blackwater makes some higher capacity options available in the future (I’d be surprised if they don’t). You can load the magazines into the Sentry 12 with a closed bolt easily. The magazines also won’t test your thumb strength. A lot of magazine-fed shotguns are a great way to get some (a lot of) grip exercise, but the Sentry 12 isn’t one of them.

As a side note, they fit perfectly in Blue Force Gear Ten-Speed AR 10 pouches.

Shotguns are so much fun to shoot, and in these trying times, I can still get shotgun ammo in all varieties (at least so far). Armed with 200 rounds of birdshot, 100 rounds of cheap Rio buckshot, and plenty of clay pigeons, I hit the range for a couple of days. Mag after mag of bird and buck proved this gun is as reliable as a pump gun gets. The Sentry 12 never failed to extract, eject, or pick up the next round. The smooth and light-resisting pump presents no struggle to make the gun cycle and function.

The pump forend could have more aggressive texturing. As my hands got sweaty, I found them sliding back and forth on the pump. A slight hump acts as a handguard, and my hand never left the pump when sliding, it was just annoying.

The Sentry 12 is a flat-top design with 17 inches of Picatinny rail, allowing you to add the irons or optic of your choice. (Courtesy Blackwater)

The gun comes without sights, but the rail is long enough to add whatever you want to the gun. I used a SIG Romeo 5 XDR, and it proved to be a good companion to the gun. The Olight Odin was less ideal, but that’s another subject for another day. As you’d imagine, a 6.5 pound 12 gauge can have some kick to it, but with the push-pull technique, I never found it brutal with standard velocity buckshot loads. My aforementioned girlfriend handled it fine with buckshot, and she’s a relative noob to shotguns.

Here’s a load of Rio buckshot at 10 and 15 yards to show the patterning with affordable ammo. With good recoil mitigation techniques, I could blast through a 5-round magazine in 2.3 seconds according to my shot timer. 15 yards with the cheapest buckshot (Travis Pike for TTAG)

Since this is a mag-fed gun, I had to do some shooting with mag changes. I started with one round in the gun, fired it, then did a magazine change, and ended by firing another single round. I could do that reload drill in three seconds and did it five times. With more practice, the time would be reduced, but off the cuff, that’s not too bad.

The magazines don’t drop free, so you’ve got to grip and rip them. If you’re smarter than me, you won’t instinctively keep returning the pump forward before you reload and could shave a little time just for that. The magazines lock firmly into place, but there is no click or feedback to tell you that, so I always give the bottom a healthy smack.

The Sentry 12 is a very nice change from other magazine-fed pump actions. Being built from the ground up as a magazine-fed pump gun was a good start and to me, it results in a better firearm than adapting a tube-fed shotgun design to take box magazines.

The ergonomics are on point, the magazines are well done, and the gun performs. I have a few minor complaints, but the biggest is that $899 price tag. Hopefully, the gun will be a bit cheaper when it hits dealers.

Accuracy: * * * * *
The Sentry 12 is a shotgun and at shotgun ranges it’s tough to miss with a shoulder-fired weapon and decent technique. The cylinder bore allows it to function perfectly with great long-range loads like Federal FliteControl.

Reliability: * * * * *
Pump-action shotguns can mess up, but it’s gotta be pretty poorly designed to do so. The Sentry 12 is well designed and it functions perfectly with both cheap and good ammo. The pump action is smooth and never binds. Loads from magazines easily and ejects shells reliably.

Ergonomics: * * * *
I’ll be harsh here and complaint that the magazines don’t drop free when the release is pressed. And there is no feedback when you insert a new magazine into the Sentry 12. There are rear QD sling points but no forward sling points (you’ll want to use a single point sling with the Sentry 12). The good news is everything else here is great. The controls are where they should be and they’re ambidextrous.

Customize This: * *
The long rail at the top allows you to outfit the gun with optics, sights, a 12 o clock flashlight, and that’s about it. No extended magazines, replacement barrels, or stocks are available at the time of this writing.

Overall: * * * *
The Blackwater Sentry 12 is a great shotgun, and it’s the best mag fed pump action I’ve handled yet. I want to see bigger magazines, but my complaints are minor. Blackwater might be new to the firearms game, but the Sentry 12 shows a promising future for them.

2020-10-30
Previous Post: ‘Scientific’ Study on Game Meat Leaves Out the Science
Next Post: BREAKING: Judge Orders Kyle Rittenhouse to be Extradited to Wisconsin