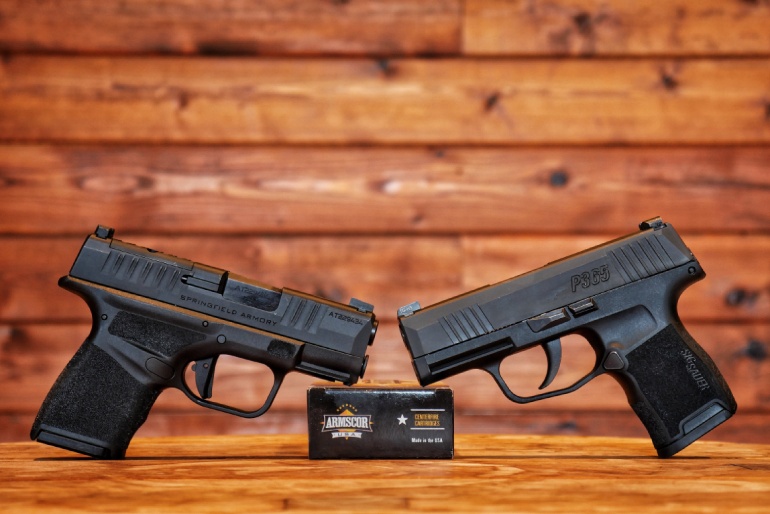 Neither of these popular pistols are on the California handgun roster. But they’re for sale in the other 49 states. (Jeremy S. for TTAG)

The Second Amendment Foundation and Citizens Committee for the Right to Keep and Bear Arms today filed a federal lawsuit against the State of California in a challenge of its recently-expanded ban via its so-called “Roster” laws.

Joining SAF and CCRKBA are the Firearms Policy Coalition and San Diego County Gun Owners along with two private businesses and nearly a dozen individuals. Named as defendants are California Attorney General Xavier Becerra and Luis Lopez, director of the state Department of Justice, Bureau of Firearms, in their official capacities. The lawsuit was filed in U.S. District Court for the Southern District of California. Plaintiffs are represented by attorneys Raymond M. DiGuiseppe of Southport, NC and Michael P. Sousa of San Diego. The case is known as Renna, et.al. v. Calif. Attorney General Xavier Becerra, et.al.

Under California’s “Roster” scheme, law-abiding Golden State citizens are prevented from buying and, or self-building thousands of handgun models that are available anywhere else in the country. Under the state’s “Unsafe Handgun Act,” the state can arbitrarily ban handguns that are perfectly legal to own anywhere outside of California. Plaintiffs’ attorneys contend this is an unconstitutional ban.

“It is clear that the intent of California’s anti-gun lawmakers is to ban more and more protected arms through increasingly restrictive legislation,” explained SAF founder and Executive Vice President Alan Gottlieb. “This expanded handgun ban scheme cannot go without challenge. We look forward to prevailing in this case and winning Second Amendment rights one lawsuit at a time.”

“In Heller the U.S. Supreme Court provided a simple test: if an arm is bearable and in common use for lawful purposes, it is prima facie protected under the Second Amendment, period,” FPC Director of Legal Strategy Adam Kraut added. “The handguns California prevents law-abiding people from purchasing and making themselves are protected arms.”

That analysis prevailed in the case of Duncan v. Becerra, where the Court found California’s ban on common firearm magazines to violate the Second Amendment and is currently being argued in another SAF lawsuit, the closely-related challenge to California’s Roberti-Roos Assault Weapons Control Act, Miller, et. al. v. Becerra et.al. Miller is set for an accelerated bench trial in January 2021.

“The Legislature has created a regulatory scheme that prevents people from buying handguns that are widely available and popular in the free market outside of the State,” noted FPC President Brandon Combs. “California’s new and expanded handgun ban is unconstitutional because it prevents law-abiding people from purchasing the common, modern firearms they have a right to under our Constitution. Just like the State cannot prohibit people from buying the political books of their choice, different versions of religious texts, or computers with technological and commercial developments better suited for publishing speech, it cannot ban the sale and self-manufacture of these constitutionally protected handguns.”