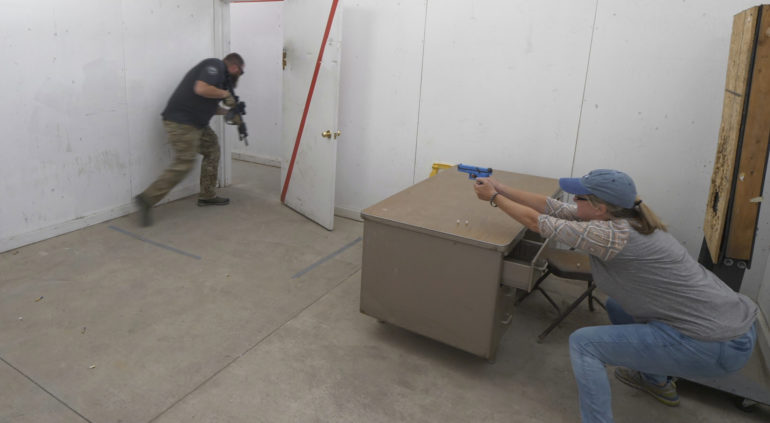 Preventing teachers from carrying firearms is just one of Joe Biden’s gun control goals. See his other priorities for rolling back Second Amendment rights here.

The idea of arming teachers to prevent school shootings burst into the national conversation after Parkland, when President Trump raised the possibility in listening sessions with grieving parents. Shortly after the 2018 shooting at the Florida high school, he told attendees at the 2018 CPAC that as many as one out of every five teachers should be carrying a gun.

It provoked an uproar. But often lost in the bluster of that moment was the reality that teachers had already been carrying guns in U.S. schools for over 10 years. Trump had just become the policy’s highest-profile advocate yet. The first serious proposals to arm teachers cropped up after the Columbine shooting in 1999, and the first school district to announce such a policy was in Harrod, Texas, in 2008, after Virginia Tech.

The decision to let schools arm teachers is left to state governments. Since the 1990s, 19 states have passed laws and created programs to arm some teachers and other school staff, like principals or superintendents. In 24 states, school boards have the discretion to authorize anyone of their choosing to carry a gun on campus. A 2019 investigation by VICE News found that in the year after Parkland, the number of school districts arming their teachers more than doubled, from around 215 school districts to nearly 500, encompassing hundreds of thousands of students.

President-elect Joe Biden has said he strongly opposes arming teachers, but because it’s up to state legislatures—which stayed resoundingly Republican this election, including in armed-teacher states like Florida, Texas, Ohio, Missouri, and Utah—it’s a policy that may be here to stay.

– Jen Kinney in Biden Hates the Idea of Arming Teachers, But It’s Way Too Late to Stop It