Pro Tip: Your Car is NOT a Gun Safe

A little reminder courtesy of the West Plains, Missouri police:

A large number of gun thefts have been reported in West Plains lately, according to local police.

Stuart said you certainly can leave your gun in your car, but it is not the ideal option.

He went on to explain some of the problems and solutions of using your car as a gun safe:

”The biggest danger and concern that we have is that those firearms will end up in the hands of people that legally can’t own them or shouldn’t own them,” Stuart said.

He said that often leads to the concern of whether or not a person may use a stolen gun to commit another crime.

With holiday shopping around the corner, Stuart also recommended doing the same thing with items you purchase while doing seasonal shopping.

“Keep those items out of view,” he said. “Lock them in the trunk of your car. If you’ve got an SUV, maybe try and put a blanket over them, something like that, just to where they’re not readily visible.”

Let me break it down for you: your car is not a gun safe. And as the holiday season ramps up, cases of car windows being smashed and valuables being stolen are just going to keep rising. It’s easy to to break a window in your car, truck or SUV and take whatever a thief wants. And if you’ve left your gun in there, congratulations, you just armed a criminal.

Yeah, you’re also out a chunk of money for the gun itself, but personally I’d be more concerned about the firearm that’s now in the hands of someone who thinks crime is the way to fund their lives. 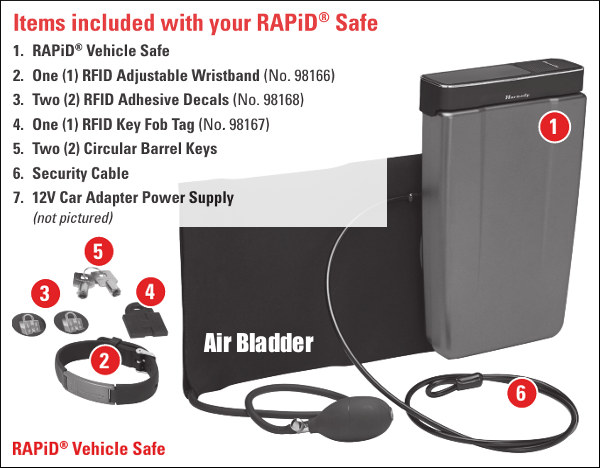 If you’re in a situation where leaving your handgun in your vehicle is the only option, get a real safe. Hornady’s RAPiD Vehicle Safe is a legit option (I own a couple myself). The RAPiD has a 14-gauge steel housing, internal hardened locking lugs, and a steel cable that can be attached to a seat frame. It can be opened using a four-to-six digit programmable security code, one of the RFID wristbands or key fobs it ships with, or one of a pair of barrel keys. Power comes from either four AAA batteries or a 12-volt car adapter.

Is this the perfect solution? No, there is no perfect solution, but it is unlikely you’re going to run into a criminal doing a smash-and-grab while also carrying heavy-duty bolt cutters or some other tool that will give them access to the safe (if it’s properly installed).

That doesn’t mean you should leave a handgun in a gun safe in your car 24/7, either. The best place for your gun is in a proper holster on your gun belt, so carry your gun. When it’s not being carried, store it securely. If you’re at home, that’s going to be in your gun safe, not parked in your driveway in your car. Your car’s gun safe won’t do you much good if the entire car is stolen, will it?

Thus ends your friendly Your Car is Not a Gun Safe PSA.

2020-11-28
Previous Post: An Anti-Gun March for Our Lives Organizer Becomes a Pro-Gun Director of a Pink Pistols Chapter
Next Post: Curtis Tactical 9mm CT700P vs Ruger 77/357The Firearm Blog