Cobray Company, best known for manufacturing versions of the MAC series of pistols and the infamous Street Sweeper back in the 70’s and 80’s, also apparently spit out a few of these unique little gems – the Pocket Pal. I say apparently, because all Pocket Pals carry the “P.P.I., Ducktown, TN” mark.

Does that stand for Pocket Pal, Inc? Who knows? But we do know Cobray sold some of these weird little twin-barrel revolvers, which fire both .22 LR and .380 ACP. Why anybody actually bought them is another mystery entirely. 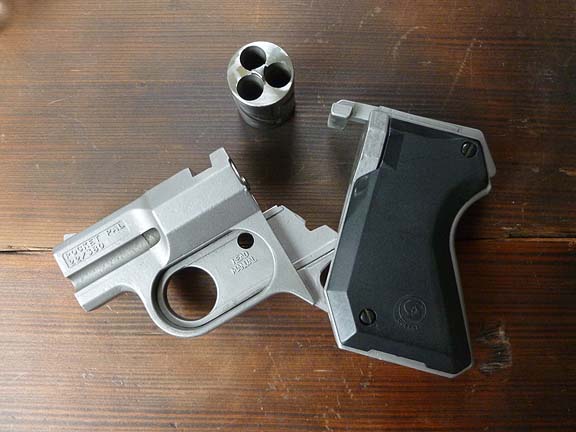 Quality is low, as the gun is clearly sand cast from some sort of “steel” with practically no cleanup after the casting process. The surface is covered with more pits and imperfections than Danny Trejo’s face. And it’s not due to their age — that’s exactly how they looked back in the day when they were brand spankin’ new.

Where machining is physically necessary, it looks just good enough to probably function. The exception here is the cylinders – one for .22 and one for .380 – which appear to be quality stainless steel with quality machine work. Press on the top latch to break open the gun, insert the cylinder of your choice, [and if you’re strong enough to pull the extremely long, 15+ lb trigger] blast away. Well, you’ll get three rounds of .380 or five rounds of .22, and then the trigger and cylinder lock. All you have to do is open the gun up again, remove the cylinder, pick the empties out, reload the cylinder, line the notches up properly, put the cylinder back in, close the gun, tell your attacker that the “time out” is over, and resume shooting. Easy. Best of all, it’s exactly as accurate as you think it is. Clearly intended for pocket carry and contact distances, there’s no worry about pushing it out of battery if you press the muzzle against something. And not much worry about accidentally pulling that weird trigger.

This is a contact distance gun. Anything more than that is a bonus.

Although it’s very compact, thanks to the fairly thick, cast metal frame it simply weighs far too much for its size by 2013 standards. I’m not sure what possessed somebody to sit down in the 70’s or 80’s and, um, borrow from the circa-1920 Mossberg Brownie design, but the result, is easily the most obscure, least reliable, silliest paperweight gun in my collection.