Last week’s takeover of the U.S. Capitol, which was accomplished without any known discharge of firearms by the occupiers, has now triggered a rapidly escalating campaign to punish the Second Amendment community. The widening crackdowns and denunciations have moved at an alarming speed as the countdown to the Biden/Harris Inauguration continues.

In the latest developments, the Associated Press has confirmed that Michigan has now banned the open carry of firearms in the statehouse in Lansing. The new regulation was announced by the Michigan Capitol Commission, which had previously resisted calls to issue a gun ban after armed demonstrators, angry about Governor Gretchen Whitmer’s Covid-19 restrictions, surrounded the statehouse there.

That action followed a report from ABC News about a leaked FBI Bulletin purporting to warn of plans by armed citizens to converge on all 50 state capitols on our about January 17th. 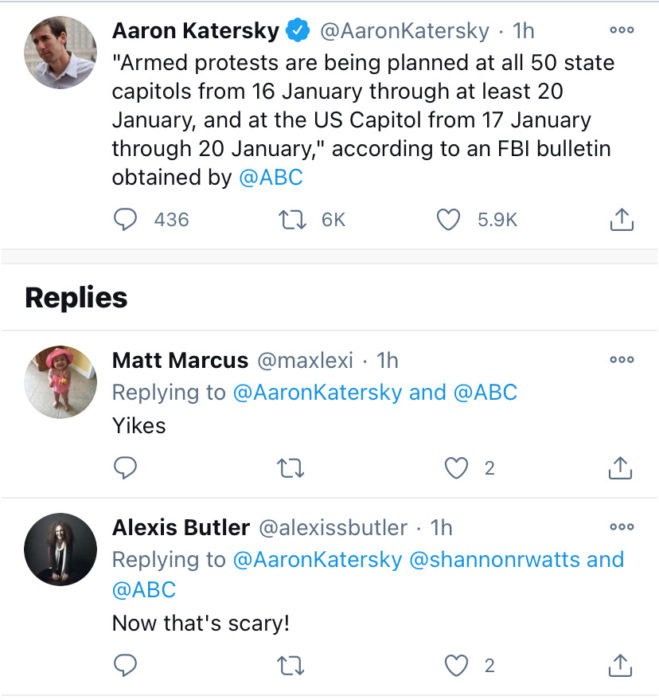 Specifically, the FBI alert makes the claim that one militia group is calling for “storming local, state and federal courthouses if Trump is removed from office before Inauguration Day”.

The threat appears to have been triggered by repeated proclamations from House Speaker Nancy Pelosi and other Congressional Democrats that they are moving ahead with actions they hope will lead to President Trump being removed from office and stripped of any future eligibility to run again.

The FBI leak also outlines a separate alleged plot underway about “an unidentified group intending to travel to Washington DC on 16 January”.

Summarizing its concern, the FBI bulletin is said to underscore that clashes between armed citizens and police forces across the nation could extend over 4-5 days across the country.

In the days since the U.S. Capitol takeover, social media has been buzzing about myriad “plots” supposedly forming to disrupt the Inauguration.

One of the more widely circulated posters showcases what has been termed “The Million Militia March”, which would feature armed citizens gridlocking the city and possibly attacking those guarding the Capitol so as to make any Inauguration ceremonies impossible. At the same time, other posters have been circulating on social media declaring other supposed armed gatherings in DC and other state capitols January 17th. Before it was taken down, some posters at Parler was sharing a call to flood Washington, DC while “carrying our weapons” on January 19th. Specifically, the FBI has warned that a clash at the statehouse in Columbus, Ohio has been repeatedly mentioned in online chatter hosted by conservative groups.

In Maryland, the governor has his hands full attempting to provide security on two fronts: at his own state capitol and his mutual assistance pledge to Washington, DC officials.

Governor Larry Hogan, the Republican governor of the Old Line State adjacent to the District, has long been a vocal critic of President Trump. He has reported that he’s in regular contact with Virginia’s Democrat Governor Ralph Northam, DC Mayor Muriel Bowser, and with the FBI to coordinate regionally.

At a press conference, Hogan stipulated that a minimum of 500 National Guard members would be allocated to secure the Maryland statehouse in Annapolis against reported threats, adding that he is now concerned that number isn’t high enough. Said Hogan:  “I think we are going to be increasing several hundred more guard members.”

With their announcement of heightened security at their statehouse, the Maryland State Police released yet another poster allegedly circulating on Facebook, repeating that January 17th will be the day for an armed march on all 50 state capitols. A significant number of observers, though, are suspicious as to the origins of these “call out” posters. They note the absence of American flags in a graphical genre that is routinely  saturated with them.

Overall, the number of National Guard call-ups, which was once at 6,000 could approach 15,000 members deployed to Washington in a matter of days. They will be joined by thousands more police, state troopers and federal agents outfitted to repel any possible second attempt at occupying a building that was last overrun by the British in the War of 1812.

Federal officials have approved the plan to take the five-day “national special security event” designation for Washington DC, and expand it to 10 days.

Also, concerns by Democrats that the National Guard may harbor “patriot sympathizers” has now spilled into public view with the release of transcript notes from Colorado Congressman Jason Crow’s discussions with Secretary of the Army Ryan McCarthy.

In the transcript release, Rep. Crow “raised grave concerns that active duty and reserve military members were involved in the insurrection” at the U.S. Capitol. Crow also demanded expedited investigations, as well as a “CID review of troops for the Inauguration to ensure that deployed members are not sympathetic to domestic terrorists”.

If recent days are any guide, the overheated rhetoric linking millions of law-abiding gun owners to American political violence will continue to fall flat.

This past Saturday, officials at the Kentucky statehouse expressed grave concerns that more than 100 armed citizens had converged on their capitol complex in Frankfort. The Lexington Herald Leader described the group as “heavily armed” militia members who had gathered to rail against the Commonwealth’s U.S. senators and the governor. Democrat Governor Andy Beshear tweeted that intimidation and bullying would not work. Despite raising alarms, the Lexington armed citizen gathering was reported as “peaceful and with no attempts to by demonstrators to enter the statehouse.” Yet, the campaign to suffocate conservative social media in general — and Second Amendment supporters specifically — rolls on.

In addition to the highly publicized takedown of the Parler social media app, there is also the Big Tech wipeout by Discord of a server called “TheDonald” that hosted Trump-related discussions and reposted content from the now former r/DonaldTrump subreddit. Discord is a free application that recently reported 250 millions users, with 14 million of its members signing on every day.

Discord issued this statement regarding the deplatforming: “We have a zero tolerance policy against hate and violence of any kind on the platform, or the use of Discord to support or organize around violent extremism”.

While there is word that the principals at Parler have found a new hosting service, the digital Pearl Harbor attack this past weekend on conservative social media has many on the pro-Second Amendment side understandably concerned.

However, there is reason to believe that safe harbors will continue to be available for beleaguered gun rights supporters while the disruptions are sorted out. There are many state levels forums with .org and .com platforms that are private property, and are in a better position to fend off leftist digital purges.

CALGUNS.org continues uninterupted, while across the country sites like the POFOA forum is keeping Pennsylvania firearms owners plugged in.

In Maryland, MDSHOOTERS.com, has been become a lighthouse of sorts for gun owners seeking 2A updates and information. Like CALGUNS, it is an active site that draws members from all 50 states.

In the meantime, the next major public test for Second Amendment supporters to gather in public comes in less a week. On January, 18th, just 48 hours before the Inauguration ceremonies in DC, Richmond, Virginia will host an armed citizen demonstration that, if it has the same level of buy-in as last year, will include tens of thousands of gun rights supporters standing for gun rights.

And then, there’s this: the half-hearted calls from the Biden crowd for unity have now trickled to nothing as the Democrats turn their focus to a nationwide “Be On The Lookout” campaign to round up “the insurrectionists” Multiple “wanted posters” have now popped up at bus stops all across Washington, DC and in the Maryland suburbs urging folks to call the FBI if they recognize any of the people pictured. The effort to stain any identifiable participant at the January 6th rally and march — tens of thousands of whom never tried to enter the Capitol — and march has now escalated to putting people on the national “no fly list.”  That effort moved with such speed that some visitors to DC found they were barred from flying home from DC less than 24 hours after the protest.

Every effort is now being made by foes of gun rights to tar all gun owners as violent insurrectionists, the better to push the incoming Biden administration’s ambitious gun control agenda.