Taurus, manufacturer of premium handguns for defense, hunting, and sport shooting, announces the next iteration of the ground-breaking TaurusTX™ 22 semi-automatic sporting pistol. The new TaurusTX™ 22 Competition builds on the original TaurusTX™ 22 with a slide assembly engineered for optic compatibility. The TaurusTX™ 22 platform, introduced in early 2019, set a new standard for rimfire pistols. Taurus developed this full-frame polymer handgun with a focus on ergonomics and “custom-tuned” performance to deliver an out-of-the-box competition level pistol that is both budget-friendly and that can serve as a training platform for experienced and novice shooters alike. The TaurusTX™ 22 proved to be a big hit with rimfire fans right out of the gate, with the pistol being awarded “Handgun of the Year” by Guns & Ammo magazine. The TaurusTX™ 22 Competition features a “skeletonized” slide with a cutout between the ejection port to just behind the front sight. Part of the TaurusTX™ 22 Competition platform is a 5-inch bull barrel with the breech end machined to accept a base mounting plate. 2 small adapter plates are provided to provide 4 different mounting patterns. this mounting system allows the use of the following (but not limited to) sight models:

The match-grade bull barrel comes threaded from the factory to accept a suppressor or muzzle device and includes a thread protector. 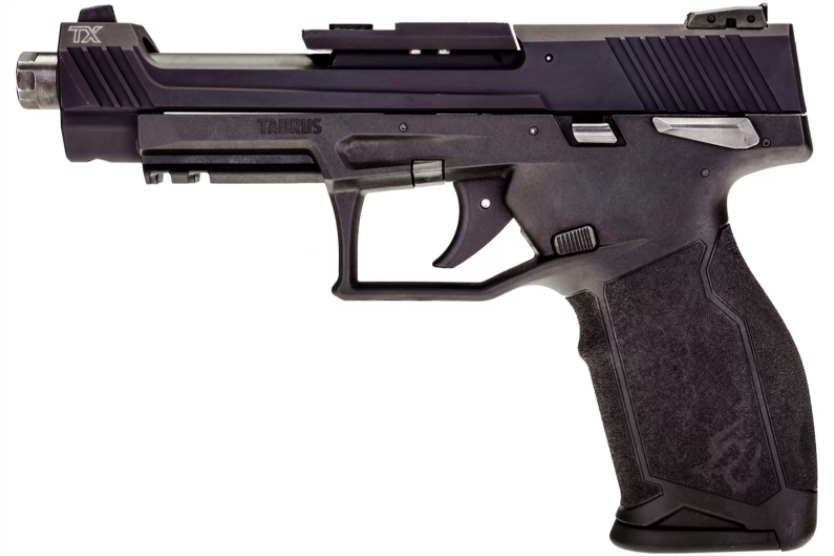 “The engineers at Taurus definitely thought outside of the box on this firearm, from the beginning of the TaurusTX™ 22 to this competition model,” said Jessie Harrison, world-champion shooter and Captain of the Taurus Shooting Team. “They put a lot of thought and research into the ergonomics of the grip and designed something that feels natural in the hand. The trigger system is unlike any other Taurus firearm — a single-action-only striker-fired trigger that feels smooth and breaks crisp. That’s important from a competitor’s standpoint for speed and rapid fire. The threaded barrel that would be typically used for a suppressor doubles for a compensator, if you so choose. All that’s needed is to add your optic of choice and you’re off to the races!”