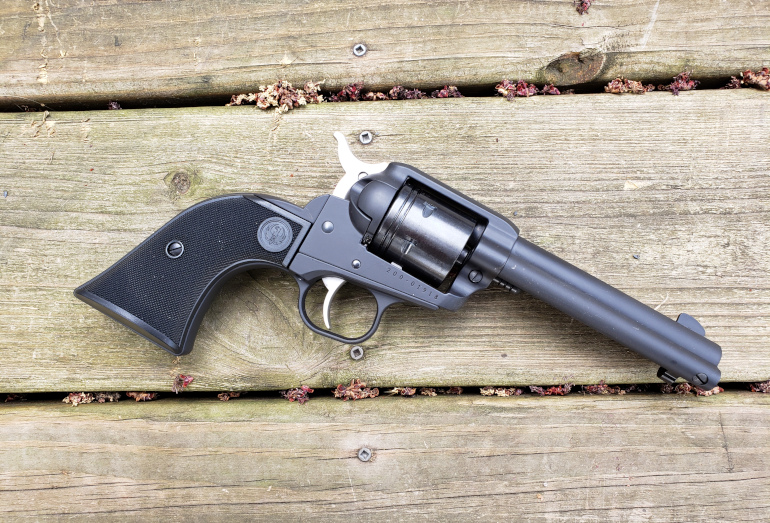 The legend of the Wild West exists in the heart of every American. It’s our heritage and our birthright. Ruger knows that the spirit of the West belongs to each and every one of us and has released a new gun that has all the ruggedness of an old cowboy, but at a price we all can afford. Today we will be taking a look at the new Ruger Wrangler in .22LR

With an MSRP of only $249 and a retail price well under two Benjamins, the Ruger Wrangler is one hell of a deal. I will get into the features of the gun in a moment, but I first need to address the introductory price of this piece. I often hear that guns today are too expensive and that many companies have a very high potential customer exclusion rate. While I think that everyone should own the best guns they can afford, that line is different for everyone. Slip the affordable Wrangler into a good holster and you have one of the most enjoyable handguns you can buy on your hip. (Josh Wayner for TTAG)

Not everyone can afford a $900 pistol or an $1,800 rifle with thousands in optics and support gear, but the person who can should be applauded, not shamed for their investments. Likewise, a man who owns a ‘cheap’ gun shouldn’t be shamed either for not buying into all the bells and whistles.

The idea that the rimfire Ruger Wrangler is a ‘cheap’ gun is false. While it’s inexpensive relative to other guns, it is not at all of poor quality. There are certainly some terrible guns out there that you can buy for a couple of bills, but this isn’t one of them. I would say that this gun is of equal quality to most of Ruger’s revolver line and is better than most all of its competitors in the same class and feature range.

The class of gun we’re talking about is something of interest here as well. The Wrangler is a full-size revolver with a 4.6” cold hammer-forged barrel and 30 oz of heft. This puts it just under the same weight and size as a Single Action Army revolver.

The only area where the Wrangler is truly smaller than the old .45 is in the cylinder and aluminum alloy frame. The rest is fairly comparable in size, which means that it will not feel like a tiny gun to adult shooters while being comfortable for kids and newbies at the same time. Some features are identical to the old SAA while there are some differences. To load a traditional SAA, you need to put it into half-cock and open the loading gate. The cylinder only spins clockwise. Insert your cartridges and then close the gate.

Make sure you don’t lower the hammer on a live round or it could ruin your day. Many people load five in a sixgun for safety with the hammer down on an empty chamber. I do this when carrying a traditional sixgun in the woods. The transfer bar safety and loading gate interlock mean the Wrangler is safe to load all six chambers. (Josh Wayner for TTAG)

The Wrangler rimfire revolver is a bit different. Opening the loading gate disables the hammer and allows the cylinder to spin freely in either direction. SAA fans will know that if you miss a chamber, you have to go all the way back around to get it again.

The good news is you can safely load all six rounds in the Wrangler, which has a transfer bar firing mechanism. That means the firing pin is retracted until the act of firing. On an original SAA, the firing pin is always active as it’s fixed to the hammer and can come to rest against a live primer if the shooter isn’t careful, which is why most carry on an empty chamber.

The Wrangler has the same ejection rod as the SAA and empty cases must be manually extracted. The sights are also similar in that they are a fixed blade front sight and a simple notched rear sight. The sights are not adjustable. The affordability of 22 LR ammunition means you can shoot all day long. (Josh Wayner for TTAG)

So how did the Wrangler perform? I tested it for accuracy and reliability and put about 500 rounds through it from a mixed bag of ammo. I had no issues to speak of as far as reliability goes.

Accuracy was seemingly built in at the factory. I had a great time shooting it and just couldn’t miss at ranges out to 35 yards. The gun shot right where it was aimed and steel rang just about every shot. This revolver is the very definition of fun.

As the Wrangler is a relatively heavy .22 long rifle revolver, it exhibits virtually no recoil, making it a very pleasing plinker. I could have shot it all day long with not a hint of discomfort. The trigger is excellent. You expect a good trigger in a single-action revolver but the Wrangler’s is exceptionally crisp with a light, clean break. The Wrangler has a Cerakote finish on the aluminum alloy cylinder frame. (Josh Wayner for TTAG)

That’s an important feature for young shooters who are lacking in finger strength as well as those looking to build marksmanship skill at a low price of entry. Nothing is more frustrating than having to send a factory gun off for trigger and action work. It is nice that, after centuries of manufacturing, mankind is able to deliver a good factory trigger on an affordable gun.

My time with the Wrangler was well spent. I like that it has everything you could hope for in a gun with a street price less than $250 new. I am pleased with the sample I got and, intent to play with it a bit more and see just what extra fun I can squeeze out of it. Ratings (Out of Five Stars)

Reliability * * * * *
I had no issues with the Wrangler. The firing pin is robust and cylindrical and strike marks were deep and consistent.

Accuracy * * * * *
The gun simply puts lead where you aim it. I tested a variety of ammo and the gun produced groups on paper at 25 yards that averaged 2.75” for ten shots. Shooting it against steel was a hoot.

Ergonomics * * * * *
The single action revolver, particularly those resembling the Single Action Army, have always been known as some of the most comfortable and sculptural guns ever made. The grip size and weight make for a great day at the range.

Customize This * * *
Sadly, there is not much that can be done to alter this gun without sending it out for work.

Aesthetics * * * *
While maybe not the prettiest revolver out there, there’s a charm to the ruggedness and no-frills attitude the Wrangler displays. The clean, even Cerakote finish on my sample is black, but it’s also available in silver and burnt bronze.

Overall * * * * *
If the price isn’t enough to catch your interest, the features should do the trick. The Ruger Wrangler is a solid, reliable gun that has a great number of end uses. Many here see a fun gun for plinking at the range. Others see a good kit gun for their fishing adventures. This gun can be whatever you want it to be and that is the beauty of it.