I’ve been working with the Brownells BRN-180 in various forms for quite a while now. I remember when it was first introduced at SHOT Show and the first versions seemed to handle pretty nicely. I’ve now had a long time with the platform and these are my results at the 5,000 round mark.

The major element that makes the BRN-180 a wonderful thing is that it allows a folding stock with no fuss or BS solutions like some of the harebrained fixes I’ve seen for the AR-15. You can, of course, use this upper on any standard AR-15 lower receiver, but it makes the most sense to do as I did and get the Brownells lower with a Picatinny interface on what could be called the buffer tube region.

The version I have put hard use on is the older generation BRN-180 model. I don’t have a Gen 2, but I have put lots of rounds down range using both the 16” rifle upper here and the shorty BRN-180S 10.5” variant. I’ve got about 7,000 combined rounds fired between the two uppers and I have yet to have a single failure to feed or fire. That’s a pretty amazing thing when it is almost expected to have AR-15s jam at some point in its service life. I credit this to the way the interior of the receiver is designed. There is lots of space in there allowing the brass plenty of room to exit the receiver. Ejection is healthy, and brass launches at about 2 o’clock.

The longest stretch I went without cleaning the BRN-180 was about 4,000 rounds. Compared to an AR-15, cleaning the BRN-180 is so easy you’ll probably want to make the switch on that merit alone. The guts pull out the back and all you really have to do is wipe the carrier down. It stays very, very clean. A SIG folding stock is perfect and minimalist enough to not get in the way. (Josh Wayner for TTAG)

The gas system is a piston type and it runs along the top end of the barrel. As a rule these systems are generally not as accurate as a direct gas version, and I’ve gotten some varied results depending on the ammo I have used, but more on that later. My general impression when I first put hands to the BRN-180 was that it was slightly forward-heavy, but very slender (and even svelte) by comparison to what I was used to with the AR. It’s wasn’t bulky at all and it really demanded some sort of textured panels or a forward grip. When I got to firing it I really saw this to be true as the barrel and gas system are packed in very close to the handguard and it gets extremely hot after only a single magazine on a summer day.

Virtually all the heat buildup occurs where the support hand wants to rest. Because of the density of metal in the handguard, gas system, and barrel, it can retain this heat for a considerable amount of time, which is something to be aware of if you plan on shooting it in a match. Most AR handguards have a wider gap around the barrel, allowing better air circulation. Heat buildup is something that is a challenge for this rifle and can rob accuracy quite quickly, although the receiver itself stays clean and cool. This makes reliability exceptional in that the operating parts never get clogged or caked in carbon.

The AR, by comparison, gets hot and dirty all at once and heat bleeds through the entire rifle, which can lead to all sorts of jams, slowed bolt travel, grit in the trigger, and other problems. I’d love to see a BRN-180 handguard for future generations that allows for more airflow. 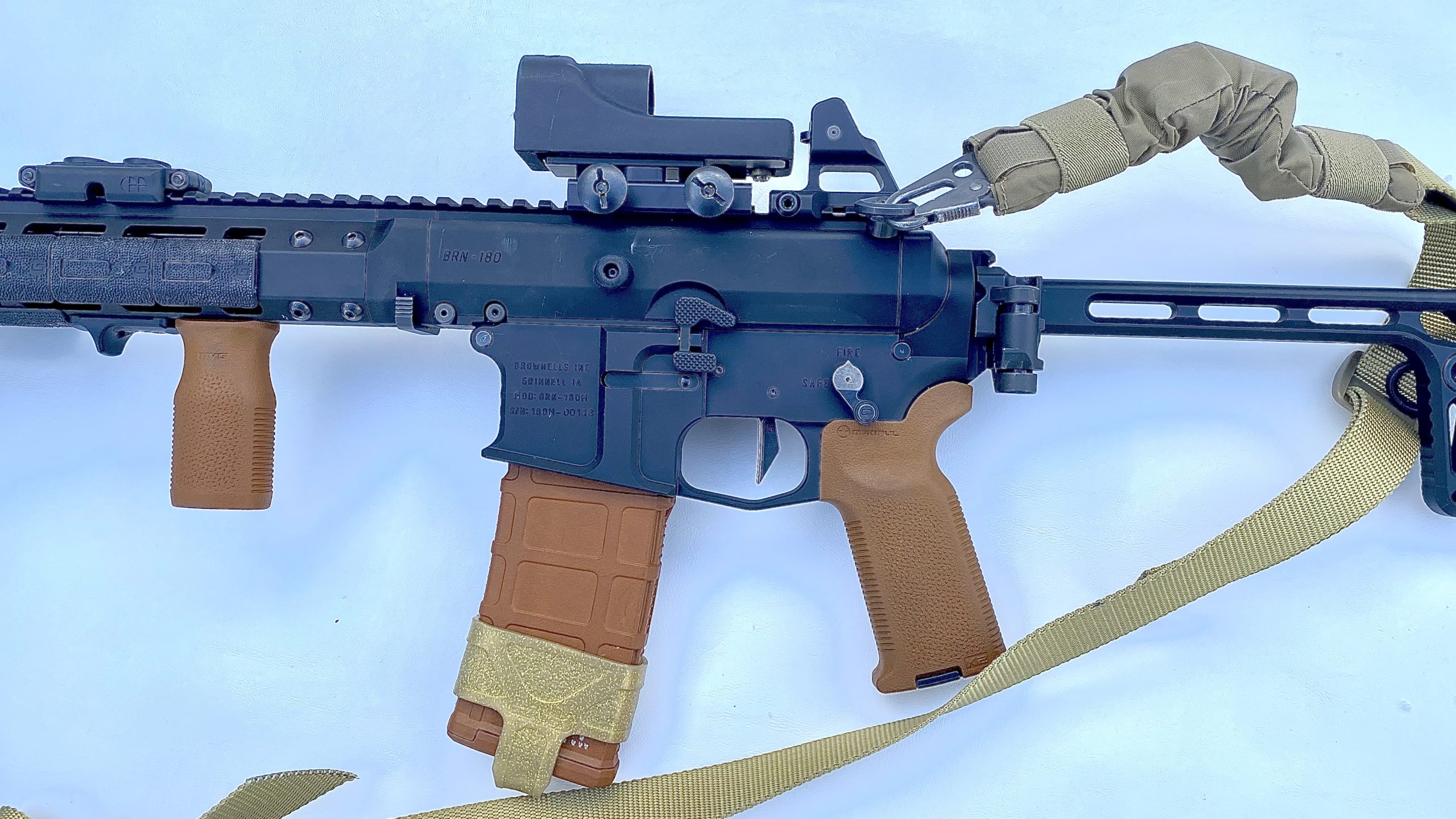 Another minor issue with the handguard is that it’s MLOK compatible, but due to how close the gas system is to the upper part, it’s difficult or impossible to mount accessories. Care must also be taken to not use mounting screws that are too long as it’s easy to accidentally tension them against the barrel itself, which is of course not good. For this reason, I strongly recommend a good reflex sight, irons, or something like an ACOG. The accuracy is excellent with 55 and 62 grain loads, with the 62gr Hornady Frontier and Hornady Frontier 5.56mm M193 each producing groups while cool of 1” at 100 meters for five shots.

After the gun heats up, those groups open up to about 3”, but overall there is no zero shift. Even while literally smoking hot, the rifle is able to keep those 3” groups. Making hits at carbine ranges is not difficult, even on silhouettes out to 400 meters. I never really got great accuracy with 77gr loads in the 16” length, so I stick to 62gr as a rule. Disassembly is easy and there are only a few moving parts. (Josh Wayner for TTAG)

I don’t want to sound overly critical. These issues aren’t that big a deal, just something to be aware of. Reliability and accuracy are perfectly fine here and are well within and even better than the specs for any rugged-use carbine.

The reliability and soft-shooting action are worth it and the rifle cycles like a nice sewing machine. The action is slick and easy to rack, and recoil is about half that of a standard AR-15. With a muzzle brake installed there is almost no felt recoil into the shoulder. My time with the BRN-180 isn’t over and I’m happy to have it as a general-use item in my work rotation. You’ll be seeing more of it as time goes on here, so keep an eye out. In the mean time, go and see the new variations at Brownells. Like so many guns now, they’re hot sellers so you’ll want to jump on it when it’s in stock.

As an AR alternative, the BRN-180 rocks. As a standalone rifle, it rocks even harder. If you want something reliable and rugged, look no further.