The Bidenharris Administration Is Selling Americans a LOT of Guns 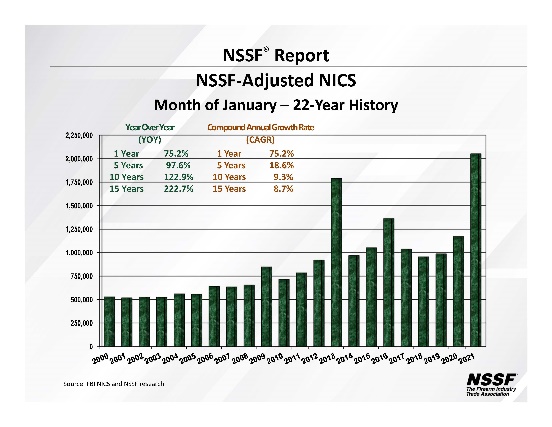 Lots of learned media members and assorted Twitterati have opined that the Bidenharris administration is nothing more than a third Obama administration. Or perhaps Obama on steroids. Whatever. After only a couple of weeks on the job, it looks like one area in which President Grampy McUnity will completely outshine his old boss in is motivating Americans to buy even more firearms than the putative Greatest Gun Salesman In History ever did.

So much for the bogus theory that Obama’s race scared people into arming up.

It’s not hard to figure why Biden is selling guns as fast as Budweisers at a July baseball game, considering he came into office pledging to enact the most ambitious anti-gun agenda in the history. The thing is, Americans are kinda funny that way. Tell them that they can’t — or soon won’t be able to — do something and it tends to make us want to do that thing even more. If only to raise a long, proud middle finger at the anxious rights-abrogating politicians behind the restrictions.

So that’s how we got January’s whopping total of over 4.3 million background checks performed by the FBI…the largest monthly total ever. By a good margin. The NSSF’s Mark Oliva had some thoughts on the meaning of it all . . .

It can’t be discounted that many of these background checks for the purchase of a firearm are attributed to threats by the Biden administration to enact the most radical and far-reaching gun control agenda ever proposed. Americans are continuing to purchase firearms at a blistering pace. That’s undoubtedly connected to President Joe Biden’s plans to attack the firearm industry by undoing and rewriting regulations and executive actions to target the firearm industry, which started with freezing the publication of the Office of the Comptroller of the Currency’s “Fair Access” banking rule.

The Biden administration interfered with an independent government agency to further an agenda and perpetuate the illegal Operation Choke Point by farming it out to corporate banks. That was just the opening salvo.

President Biden promised to pursue the repeal of the Protection of Lawful Commerce in Arms Act (PLCAA), weaponize the Bureau of Alcohol, Tobacco, Firearms and Explosives (ATF) to revoke licenses for minor clerical errors and ban entire classes of firearms from lawful ownership and tax or seize modern sporting rifles (MSRs), or AR-15 style rifles, and magazines in a scheme that would cost those owners an estimated $34 billion for the privilege to own what they already lawfully own.

The Biden administration has yet to put forth a single proposal to tackle the crime, lawlessness, rioting and looting that has plagued this nation for the year.

January’s NICS figures clearly spell out that the demand of law-abiding Americans to purchase firearms isn’t abating. It is growing. Three of the top 10 weeks and one top 10 single day for the highest number of FBI NICS background checks occurred in January. Taken into context that all but one of the top 10 weeks and four other top 10 single-day records occurred during the 2020, when 21 million background checks were conducted, these are a jaw-dropping figures to start the New Year. Americans are claiming their Second Amendment rights to provide for their own safety in record numbers.

What did you buy in January?