Carrying extra shotgun ammo isn’t easy. It’s big, bulky, and tossing on a plate carrier or chest rig during a home defense situation is unlikely. The side saddle is the most common method of carrying spare rounds on the gun and is often the fastest means to reload. Recently I stumbled across the Flash 5 stock by a company called TactaLoad. The folks at TactaLoad sent me one for my Mossberg 590A1, and I’ve been putting it through its paces.

The Flash 5 was designed by a retired Secret Service agent who extensively used the Speed Feed stock on government guns. The Flash 5 is available for the Remington 870 and Mossberg 500/590 series shotguns.

Installation is rather simple, but as you’d imagine, there are a few extra steps. You need to remove the Flash 5’s integral magazine and a rear plate. Then you install the stock via bolt like you would any other stock.

TactaLoad includes a nice long Allen wrench that makes installation super smooth and easy. Once the stock is installed, you can then install the magazine follower and spring and rear plate with a separate screw. The magazine guts have a spacer that needs to be removed to accommodate 3.5-inch shells if you plan to use them. With the spacer installed, the magazine will accommodate only 2.75 and 3-inch shells. Additionally, TactaLoad sells half-inch spacers to increase the length of pull as you see fit. The spacers will work with either the Tactical butt plate or the standard recoil pad. You can utilize two spacers at a time to add up to an inch length of pull where needed.

The Flash 5 In Action

The Flash 5 is loaded with the rim of the shells facing toward the shooter. The shells are held in place with both friction and a spring-loaded gate. The gate moves without much resistance and can be pressed downward when drawing out a shell. The magazine positions the shells for easy access for either hand and makes drawing shells out both easy and intuitive. Gripping the rim of the shell and pulling it from the stock is very natural, and when done properly, all you have to do is rotate your wrist to slide the shell into the magazine tube. It’s quick and easy, and you don’t even have to break your firing grip or sight picture to load the shotgun’s tube magazine.

Loading one round at a time seems to be the most intuitive way to reload. I tried removing more than one and ultimately it felt a little clumsy to try and load two at once. The loading gate and friction do an excellent job of keeping the shells in place. I attempted several sprints with various capacities loaded into the magazine. My main concern was when the Flash 5 was loaded with a single round.

When only one round is loaded into the stock, it tends to move around a good bit. Try as I might, I couldn’t get the round to twist and become inaccessible or to jam the Flash 5. 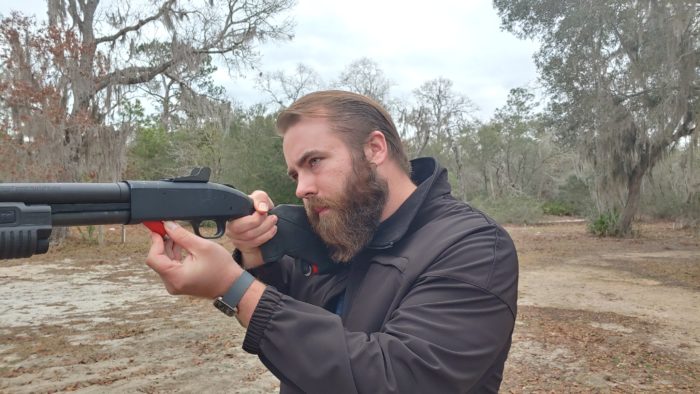 I’ve reloaded from the Flash 5 hundreds of times now. I’ve alternated between magazine tubes and port reloads and worked the Flash 5 over and over and over. The internal magazine never failed or jammed in any way.

Flash 5 vs. Side Saddle

I mentioned side saddles in the beginning, and while they are the current standard, I see a number of advantages offered by the Flash 5. First, as stated above, this system is completely ambidextrous. Side saddles are rarely lefty-friendly. Lefties get love with the Flash 5

Second, the Flash 5 keeps the gun nice and streamlined. It fits more easily in racks, especially if the gun is literally riding shotgun in a police cruiser. It also allows you to use safes like the Hornady Rapid Safe wall mount model.

Side saddles can get tangled up in gear when worn, and also when things stick off the side of your gun, they tend to get caught on something somewhere.

The Flash 5 is also at least as fast, if not faster than a side saddle for reloading the tube magazine. I have tons more practice and thousands more reps with a side-saddle than the Flash 5. However, I could load five rounds from the Flash 5 in the same time it takes to load four from a side-saddle.

At best, I tied with the side saddle, and often the Flash 5 proved to be faster. There is just something more intuitive about removing the rounds from a horizontal feed to install them into a horizontal tube magazine. Port reloads tend to be slower than a side saddle, but only by a hair. (Travis Pike for TTAG)

The only time the side saddle wins more often than the Flash 5 is in emergency port reloads. I was often able to pull off a slightly faster port reload with the side saddle, but the difference is measured in thirds of a second.

Ammunition in a side saddle is also exposed to the elements. Rain, moisture, dirt, dust, and more can cling to your ammo when it’s hanging on the side of your receiver. With the Flash 5, the ammunition is housed and protected in the stock, away from the elements.

The Flash 5 places the ammunition and its extra weight at the rear of the gun. Big side saddles can make the gun feel off-balanced. Also, when you reach for a spare round using the Flash 5, it’s always in the same place. With a side-saddle, you have to get used to moving back and forth along the saddle as you pull rounds. Lastly, side saddles that connect with bolts that run through the receiver can be a tricky proposition. You have to tighten them just right. Too tight, and the gun binds up, especially a semi-auto. Too loose, and it flops around. The Flash 5 doesn’t interact with the shotgun’s action, so it can’t interfere with it.

The Flash 5 As a Stock

Besides being a spare ammo carrier, the Flash 5 is still a stock for your shotgun and needs to perform as one. The adjustable length of pull is great and makes it easy to fit the stock to your body size. The Flash 5 provides a comfortable cheek weld and a nicely textured pistol grip. The stock is made from a high impact, extremely durable polymer.

I know it’s durable because I tried to break it a bit. A shotgun is a close quarters weapon, so can a hollow cavity present a weakness in the gun? I utilized both horizontal and vertical butt strokes until the pain in my wrist convinced me to stop. I did it with the Flash 5 loaded and it didn’t cause any malfunctions or result in rounds dropping out. Mounting the stock is natural and comfortable and it handles recoil well. Recoil doesn’t cause malfunctions in the stock either. I ran full-powered buckshot for the majority of my testing and never found the stock abrasive or painful. The textured grip makes a push-pull technique easy to use. My only complaint is that the Flash 5 stock doesn’t have a rear sling swivel. That’s an oversight.

The Flash 5 performs well as both a shotgun stock and as a spare ammunition holder. The device surprised me and I think TactaLoad has a real winner here. It’s an excellent design that’s plenty durable and makes reloading fast while providing an ambidextrous design that protects your ammo and keeps it in place.

I spoke with the guys at TactaLoad, and while the stock is currently being produced for the 870 and 500 and Maverick 88 series, they’re experimenting with numerous other shotguns, including a semi-auto design in the near future. Check em out here.

Ratings (Out of Five Stars)

Reliability: * * * * *
I couldn’t get the thing to mess up with 2.75 and 3-inch shells. It never hiccuped, jammed, or failed to feed a round when I needed it. Even after hundreds of reloads and a good beating, the Flash 5 kept on working.

Durability: * * * * *
After using the Flash 5 for roughly a month now, I’ve yet to break it (though I’ve tried). Even when I repeatedly beat it against a tire, I got hurt before it did. I’ve tried and tried to get it to fail and I can’t.

Ergonomics: * * * * *
The design is very well thought out. It makes reloading your shotgun easy and intuitive. The Flash 5 also acts as an excellent stock with an adjustable LOP, a great cheek weld, and a well-textured grip.

Overall: * * * * *
I thought the Flash 5 was cool when I first came across it, but I never thought it would actually be faster than a side saddle. However here I sit, impressed and humbled. It will remain on my 590A1 and I plan to keep running it. I’m going to keep my eyes out for the new designs and can’t wait to see what TactaLoad comes up with next. The Flash 5 is designed, built, and manufactured in the United States as well.