On the same day that Nancy Pelosi requested crew-manned, belt-fed machine guns to “defend” the militarily-occupied Capitol leading up to the inauguration, President-Elect Joe Biden appeared with Brady gun-confiscationists holding “BAN ASSAULT WEAPONS NOW.” banners. This should tell you all you need to know about their near future of gun control intentions.

At the same time politicians insist that you don’t need an AR-15, a “weapon of war,” or an “assault weapon,” they are willing to deploy actual weapons of war against you, while wanting to assault you with re-education and de-programming because your political leanings make you no different than actual terrorists who commit murder.

Tomorrow, we will welcome the strongest gun safety administration we have *ever* seen. We are ready to:

When I first got involved with firearms just shy of two years ago, I couldn’t have imagined that last paragraph becoming reality. I thought that the two revolvers I purchased — a long-barreled .357 magnum for home defense and a snub-nose .38 special for concealed carry — covered all realistic threats.

Although they are fine guns for those purposes, there are more effective options. Police departments had long retired revolvers for higher-capacity pistols with better ergonomics, and there was no reason for me not to follow suit.

Even though I acquired a number of semi-automatic pistols I still didn’t think I had a need for an AR, and wasn’t convinced of a civilian right to ownership. Kamala Harris cured me of my confusion and convinced me that there was no moral or ethical justification for a government monopoly on that weapon or its capabilities. Harris’ security team sported AR-15s at the same time she threatened to ban them by executive order. It was Animal Farm’s “some animals are more equal than others” made real, without apology, embarrassment or obfuscation.

“Guns for me, none for thee” was exactly what I needed to hear and I’m grateful to her for it.

Relieved of my misguided reticence, I tried out an AR-15. The first time shooting it with iron sights from a standing position, I managed a 2.5-inch grouping at 25 yards and a 5-inch grouping at 50 yards. It’s lightweight, has low recoil, and even for a not-mechanically-inclined person like me, easily taken down for cleaning.

People are passionate about having access to this gun and guns like it because it’s an even greater equalizer than most guns. My 50-year-old eyes and joints couldn’t manage those groupings with other firearms. These advantages are the reasons it’s the most popular rifle in America, with tens of millions owned by citizens throughout the country.

My reticence was the product of the disinformation campaign waged by Brady, Mom’s Demand Action, and similar civilian disarmament groups that seek to supplant our direct experience of reality with their lies. “Assault weapon” is a made-up term intended to malign the gun and its owner and, sadly, it is terribly effective.

Who would want an “assault weapon?” Clearly only a murderous extremist, not a mild-mannered libertarian like me. Yet at the same time, the reality is that hammers, fists, and feet are used to commit more assaults than all rifles combined. AR-15s are ideal tools used by civilians for sport and to defend themselves, and they are ideally suited for these purposes. The “weapon of war” canard is another false flag. AR-15s deliver one round per trigger pull while the Army’s similarly constructed M16s and M4s can fire multiple rounds per trigger pull (if so selected), so AR-15s are clearly not weapons of war. But I’m not convinced that this distinction is very meaningful. There is no such thing as a unique “weapon of war.” In war, everything is a weapon.

I’m no longer shy about saying that there is no moral or ethical basis for a government monopoly on “weapons of war,” especially when its contemplating aiming them at us. This makes it clear that our Founders correctly constrained the government from violating our natural rights by way of a set of checks and balances, with the final check against government violence being an armed populace. Venezuela and Hong Kong are recent illustrative and horrifying examples of what happens when civilians are disarmed. 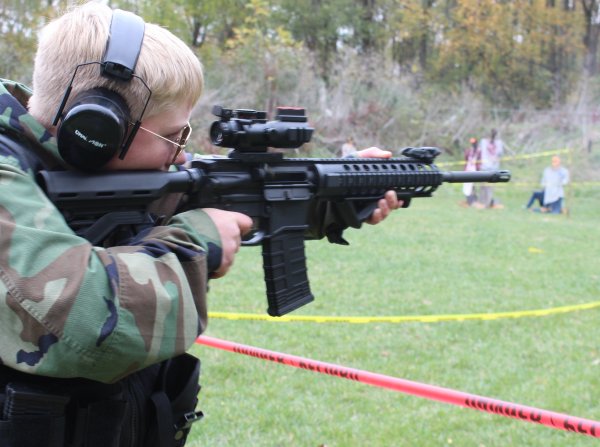 Finally, here’s an AR-15 vignette that puts the confiscationists to shame. The Virginia Citizens Defense League staged its annual Lobby Day on January 18 as a car caravan through the city of Richmond to demonstrate support for gun rights while complying with COVID restrictions and rally permit requirements. At the same time, other groups small enough not to be covered by the local gun ban ordinance — Black Panthers, BLM757, Last Sons of Liberty, Proud Boys, and the “Ron Paul Militia” — gathered publicly and marched through the Capitol carrying AR-15s.

Politicians called them “provocateurs,” claimed they were “intimidating” and said they should “go home before someone gets hurt.” But those groups peacefully coexisted in the public square, many of the participants armed with AR-15s. So it’s not the guns or their enthusiasts that are the problem.

The truth is that wielding an AR makes you tougher to kill, which shouldn’t intimidate anyone except those contemplating killing you. Given all of the above, government officials need to take a step back and acknowledge that any attempt to restrict access to these guns is without any merit.

Dennis Petrocelli, MD is a clinical and forensic psychiatrist who has practiced for nearly 20 years in Virginia. He took up shooting in 2019 for mind-body training and self-defense, and is in the fight for Virginians’ gun rights.