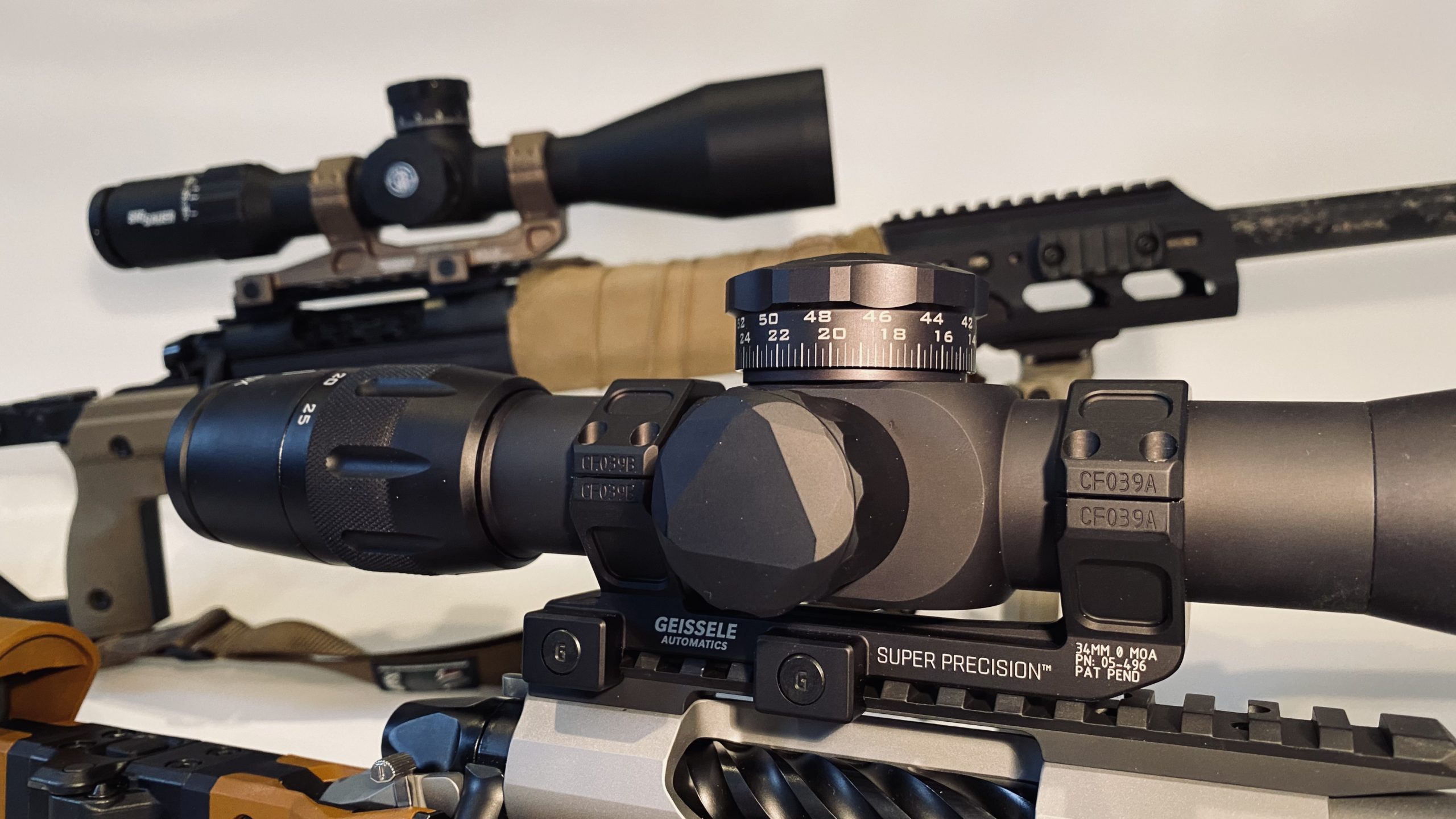 There are plenty of ways to attach a scope to your rifle. There are, however, fewer ways to do it with with any guarantee of a repeated zero. Some get close with fast QD-style levers, but I’ve only found a couple that work well enough that I don’t have to check my zero after I remove it. Fewer still are suitable for use at long range after being swapped from rifle to rifle and back again.

The Geissele Super Precison mounts are in that latter category.

This isn’t a review of one specific mount, as I have four of them here covering three models, but a general overview and my experiences with these in real-world use at ranges past 1,000 yards. First off, because I know this will get mentioned, they aren’t cheap (they start at about $325) but in this life you usually get what you pay for and this kind of performance comes at a price.

You can easily get some $50 rings, but by the time you spend your hard-earned money on a Nightforce, SIG, Leupold, or USO scope, you’re well advised to add another 10% onto the price of that $3,000 optic and buy a mount that allows maximized performance for that scope.

I never really thought that this would be the case where I would really see a difference, the functional angle of these mounts is pretty much unparalleled. Just how good are these mounts? A zero test before we get into product details should be all you need to know. I have lots of precision rifles come across my cluttered desk, but I only have a handful of high end optics that I use to test those rifles.

If I have something come through for for review and I need to grab an optic, I take it off my main rifle and head to the range. One of my long range PRS-type rifles is Mesa Precision Arms titanium action with a Proof Research carbon fiber barrel in a KRG chassis.

This rifle typically rides with a SIG TANGO6 5-30×56 in a 34mm Geissele mount. I just take the scope off, put it on the new rifle, and head to the range for testing. When I get back, I simply put it back on my own rifle and I never worry about it being off even a click. To evaluate this further, I took three of my rifles out with this optic and switched it from gun to gun, making note of zero at 200 meters for each. Swapping the scope, of course, meant that the zero was off on all but the main rifle, but the others showed the same point of impact once installed, just a bit off in the reticle, but easily compensated for thanks to the magic of mil-mil scopes.

The point is, I can take the scope off on any one of my rifles and mount it onto the next one and, if I know my zero offset, I can click it and and be zeroed to center, ready for any distance. It is just that fast and easy.

The real secret I’ve found here is in the way the mount interfaces with the rail on the rifle. A lever-style clamp system makes it so that that mount has to be adjusted separate for every rail it encounters. This meant that, in real use, if you swap from rail to rail and they are different, you’re going to be getting uneven clamping pressure which can and will influence how the optic moves with the rifle under fire.

Heat or cold can introduce swelling or shrinking enough to impart additional pressure or lack thereof onto the mount and rail. This of course leads to an inconsistent interface, making a true mechanical zero impossible to achieve. The lock nuts clamp down with serious force and easily restore zero.

The Geissele mounts differ in that their locking attachments are linear and are complimented by not just the mounting bolts, but also lugs that engage more of the rail surface. This means that the back-to-front indexing is always the same.

It should be noted that these mounts aren’t tolerant of out-of-spec rails. They are very precisely machined, unlike many AR or bolt gun rails.

Once it’s rocked on, even thumb pressure is enough to get you back on zero. I never really crank down on mine. I usually just end up using a coin and giving them a quarter turn. I’ve found that, while a torque wrench is nice, it actually doesn’t make that much of a difference for return to zero.

Another feature that rocks is the serialized caps on the scope rings. I don’t take my scopes out much once they are in the mount because I hate leveling them, but it is very nice to know that the rings are cut precisely and you won’t have to guess if there is some uneven tension on the tube, occasionally common to generically made rings and caps. You won’t need to lap these rings at all. The Geissele mounts, as mentioned earlier, aren’t inexpensive, but if you want this level of performance it makes sense. The Super Precision Mount lets you get away with one high end scope in a quality mount, especially if you end up shooting in several types of competition with different rifles.

Knowing that you can easily return to zero is great if you are swapping out rifles in a match, such as if you are running targets with an AR one day of the match and a bolt action for another category of competition. The mounts are available in several sizes and colors.

A good mount will make it so that you never really have to guess or have it married to just one rifle. High-volume varmint hunters, such as prairie dog hunters, can shoot all day and heat a rifle up badly. With a mount like this, you could remove just the upper to cool it off and install a second one with a known zero on the glass. Just click and go. That’s very appealing to those who demand those features.

The mounts in this article are both the 30mm and 34mm type. I have had the same experience with all sizes and types here and would recommend them even for carbine shooters with low powered variable optics. I wish Geissele made a mount for the ACOG that used this setup, as it would add utility to the already rugged Trijicon. But that’s wishful thinking… for now.