Anyone who knows Kimber knows it as a 1911 company. A company making metal-framed, hammer-fired, single-stack, 1911-format handguns and positioning themselves securely at the higher end of the non-custom market. Well, they’ve just broken the mold with the R7 Mako.

In the Rumble-hosted video embedded above (or click HERE to view it on Rumble), I went back to the range with the R7 to put a few more rounds through it on camera. Dan and I had already spent a day with the R7 at The Range at Austin putting the little carry Kimber through its paces with hundreds of rounds of mixed ammunition, including seven brands and styles of hollow points plus frangible, subsonic, and others.

Having proven itself to be a great shooter and fully reliable with everything we fed it, I then carried the R7 for the next couple of weeks in the Mission First Tactical IWB holster that Kimber loaned out with the gun. Three sentence review: I figured Kimber was going to hate my guts, because I opened the box and found the gun…aesthetically challenged (eye of the beholder and all that). After a week of envisioning a review more akin to an insult comic’s stand-up set, we hit the range with the R7 Mako and I no longer cared how this I’m-concealing-it-all-the-time-anyway micro-compact looked. It does all of the important stuff exceedingly well. Now that Kimber only half hates me (joining a popular club), let’s hit on the first stand-out feature: the R7 Mako’s trigger. Clearly it had to be a darn good trigger if this new-world, polymer-framed, striker-fired Kimber was going to stand a chance in appealing to Kimber’s existing customer base. After all, these are guys and gals used to finely-tuned 1911 triggers, which basically set the standard for what a crisp, fantastic pistol trigger can be.

As you can see in the video, the R7 Mako trigger doesn’t disappoint. No, it isn’t a 1911 trigger, but it’s one of the best concealed carry, striker-fired triggers available. Right out of the box. It’s light — my sample measures right at 4.5 lbs with great consistency — it’s crisp, and it offers a short and pronounced reset. I particularly appreciate that the trigger safety blade stops flush with the flat, straight face of the aluminum trigger, and that there’s no sponginess and almost no creep before the clean, crisp, and full break. Just a solid wall until 4.5 lbs of pressure is met, then a snap. It’s a really good trigger.

Of note: Kimber’s marketing material states a trigger pull weight of 5 to 6.75 pounds. My loaner, which to my understanding is a full production retail unit, is obviously measuring a bit under that range and it measures very consistently. 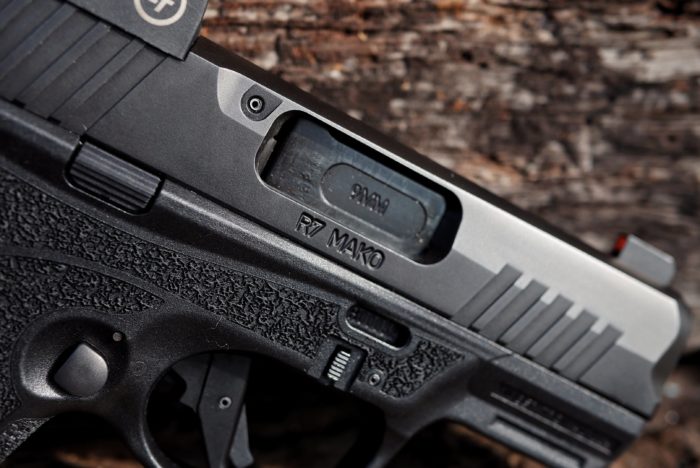 Perhaps the main feature that gives the R7 Mako aesthetics that stand out from the crowd is its ejection port. Rather than a large opening cut from near the bottom right side all the way up and across the top of the slide — often all the way into the chamfer between top and left side — as is the case with nearly all recoil-operated semi-automatic pistols, the R7’s ejection port is a smaller rectangular window that exists only within the right face of the slide.

Kimber says they did this for two main reasons:

One, it protects a mounted optic from gas and brass. This is certainly valid, as I’ve shot a lot of pistols with reflex sights on them and they absolutely do get carbon buildup and oil on the lens as it blows out of the ejection port. While I’ve never had a lens break due to an empty case impact, I’ve gotten some dings on the housing and I know it isn’t unheard of for this to be the cause of broken optics.

Two, it provides less area for dirt and other debris to enter the action. This can be a double-edged sword in some cases, but, sure, Kimber’s statement is objectively true. The barrel does lock into the slide, it’s just accomplished with a lug on top of the barrel (not entirely unlike a 1911) rather than with the whole barrel hood itself. 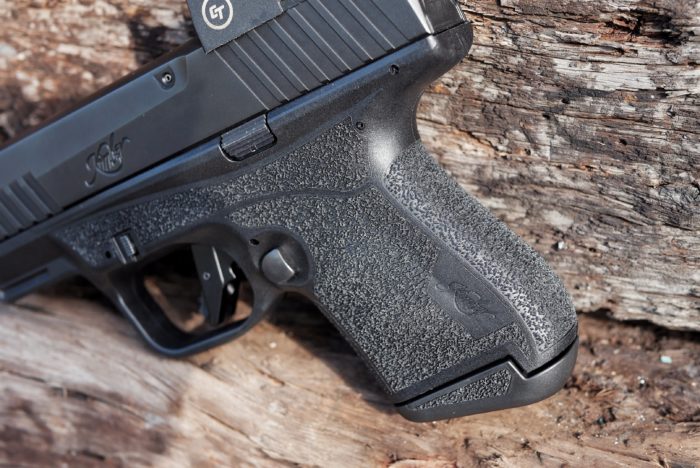 This sort of pebbled, sandpaper-like texture has become very popular among polymer-framed pistols, and there’s good reason why. The texture is grippy and secure, yet isn’t as abrasive against your skin as one might expect, and it isn’t specific to any particular hand size or R/L handedness. Unlike most micro-compact pistols, Kimber has molded nice palm swells into the R7 Mako’s grip. A curved bump graces both left and right sides ahead of the “Kimber” logo. It feels really good in the hand, and Kimber still does it with a stated 1.0-inch grip width, which is very svelte indeed. Also appearing on both sides of the R7 are the magazine release and slide catch. Fully ambidextrous, not just swappable, each of these controls is equally functional from either side. Field stripping the R7 is both familiar and unique at the same time. It starts as expected, with verification of an empty pistol followed by a trigger pull to decock the striker. Then, while pulling the slide rearward ever so slightly, pulling down on the disassembly catch by pinching it on each side and allowing the slide to move forwards.

This is where typical striker-fired disassembly similarity stops, though, along with the slide. In the photo above, the slide is shown as far forwards as it’ll go before the front and rear slide rails impact walls inside of the slide. Instead of continuing off the front of the frame, from here the user simply lifts the slide vertically right off the frame. Reassembly, as you’d expect, is simply the reverse. Place the slide directly down onto the frame with the front and rear slide rails sliding up through their relief cuts underneath the slide, then rack the slide rearwards. The locking lug automatically re-engages and you’re ready to go. One more item that jumped out at me as unique is the breach face. It’s a separately-machined component that slides down into the slide and is then pinned in place. Kimber says this was done for manufacturing efficiency. It does occur to me, though, that it will also make R7 Makos in other chamberings such as .40 S&W and .380 ACP an even easier effort for Kimber in the future, as well as make for fairly simple and inexpensive end user caliber swaps. With its flush-fitting magazine, the R7 Mako holds an impressive 11+1 rounds. Insert the extended magazine and you’re up to 13+1 rounds capacity with enough room for a pinky finger on the front strap. The aggressive inward curve at the heel helps prevent the Mako from printing when concealed. You may have noticed, the Kimber in these photos is rocking a Crimson Trace reflex optic. The R7 comes in two flavors: Optics Ready ($599) or Optics Installed ($799). This guy’s the latter.

Both versions of the R7 Mako come equipped with Truglo Tritium Pro night sights. These are fantastic sights right out of the box. Given the great sights, fantastic trigger, spot-on grip texture and ergonomics, and ambidextrous controls, there isn’t much for owners of the R7 to tinker with. There’s literally nothing that’s in need of an upgrade. This little pistol is extremely well-equipped and nicely tuned on day one. That said, the accessory attachment point under the dust cover does have its limitations in that it appears lights and lasers will have to be designed specifically for the R7. No standard M1913 Picatinny rail here. Given the Crimson Trace optic, though, and Kimber’s work with CT in the past, I suspect lights and lasers and such are forthcoming. On paper, the little Kimber is at the larger end of the P365, Hellcat, MAX-9, Shield Plus matchup. The R7 Mako is 4.3 inches tall (I measure 4.5 inches from the top of the rear sight straight down to the bottom-most part of the flush-fitting magazine’s baseplate), 6.2 inches long, 1.0 inch wide across the grip (my calipers peg it at 1.175 inches at the palm swell, 1.195 inches across the frame right by the slide stops, and 0.957 inches at the widest parts of the slide), and weighs 19.5 ounces according to Kimber (my scales say the Optics Installed model with an empty, 11-round magazine weighs 22.70 ounces). By way of comparison:

For whatever reason, when I first unboxed the R7 I thought it was a lot larger than its other micro-compact, “high-capacity” competitors listed above. It just looked bigger and handled bigger.

Some of that might be due to the taller slide. Some might be because of the extra few ounces, and some might be a result of the more palm-filling grip. On paper the difference is smaller than my first impression made it out to be. Of course, it wasn’t long before I grabbed my SIG P365 and was surprised to see guns of such similar size.

Then, upon carrying the Mako, I was surprised once again by how easily it concealed and carried. It seems like the grip angle and how the web of the hand is moved forward under the slide a bit farther, the nicely rounded heel, and the somewhat unique footprint of it simply lended itself to easy IWB concealed carry. The R7 is still the largest and heaviest of these 10+ round micro-compacts, but it doesn’t necessarily carry like it. 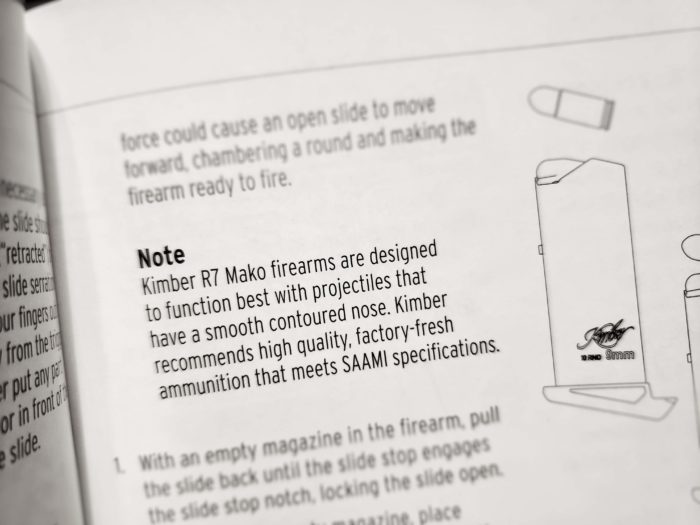 On our first range outing with the Kimber R7 Mako, Dan and I had a clear mission. Having actually read the owner’s manual for once, I noticed that concerning blurb pictured above. I mean, this is a CCW pistol and it absolutely must run hollow point and other self-defense ammunition. Clearly. Zero star review right there on the spot if it doesn’t.

So we gathered a bunch of different hollow points representing various designs, with a couple absolute “flying ashtray” big mouth bullets in the mix, plus some frangible ammo and subsonic ammo and lightweight ammo and a little bit of everything else and we hit the range.

Zero issues. The R7 confidently and smoothly fed and fired absolutely everything we fed it. Furthermore, it’s a great shooter. Surprisingly flat and fast, keeping the R7 precisely on target during rapid fire (and slow fire) was easy. I was able to track the front sight or the red dot without losing it under recoil.

Good ergonomics, grippy texture, that excellent trigger, quality sights, and a generally well-tuned recoil system all combine to make a really nice shooting gun. Especially for a sub-compact or micro-compact. Like the Shield Plus, the R7 Mako shoots and handles like a larger pistol than it is.

To be completely candid, the Kimber R7 Mako entered my review process starting way behind. Its aesthetics weren’t my cup of tea, and my initial impression was that it was too large to properly compete in this group. Plus, with the polymer frame, striker-fired format being such a departure for Kimber, I wasn’t confident it would gain any favor out on the range, either.

Turns out I was wrong. Not only does it stack up alright on its overall footprint, it conceals and carries beautifully and it excels on the shooting range. The Kimber R7 Mako is a fantastic concealed carry piece that’s fully equipped right out of the box, no upgrading or tinkering needed at all.

Style and Appearance  * *
I’m just not a fan. What can I say? Obviously this is very subjective.

Customize This  * * *
With great sights, an excellent trigger, and an optics cut (or included optic), it’s unlikely many owners will modify these things. Or even want to. However, aftermarket options for barrels, slides, triggers, sights, holsters, etc. won’t be quite as plentiful as with some other brands of pistols.

Overall  * * * * ½
The Kimber R7 Mako is an extremely competitive micro-compact at a competitive price. It may be more Picasso than DaVinci, but “concealed means concealed” and the Mako truly shines where it counts.